John Rose Putnam, Into the Face of the Devil 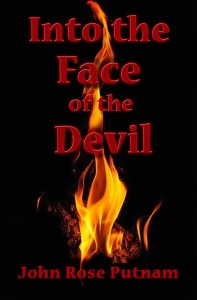 Putnam writes a straight-up traditional western, with good guys, villains, gunplay, and a little romance. Instead of ranches and open range, it is set on the flanks of the Sierras during the California gold rush. The story is told by its 16-year-old narrator, Tom Marsh, alone in the world after the death of his father and brothers. Events in the novel, as they involve him, make it a coming-of-age story.

The plot makes apt use of the genre’s well-established conventions. A pretty girl, Lacey Lawson, arrives in a mining camp ominously called Hangtown. She is looking for her father, who has gone missing. Rivalry for her affections with a hard-drinking miner gets Tom on the wrong side of the novel’s villain, known as K.O., the “devil” of the title.

Tom narrowly misses being shot dead in an ambush, and the danger for him mounts as he determines to search for Lacey’s father. Right away there’s a mystery. Who is her father and what is he doing in the gold fields? Is he investigating criminal activity or is he a criminal himself? Is he dead or alive? And who is the mysterious K.O.?

Putnam takes us on a ride on a fast horse through the ins and outs of the plot as it swiftly unfolds. Against the wishes of older and more sensible men, Tom attempts to pursue the villain single-handed and gets in way over his head. The novel is a sequel to Putnam’s previous gold rush novel, Hangtown Creek.

Into the Face of the Devil is currently available in paperback and ebook formats at amazon.
Tweet