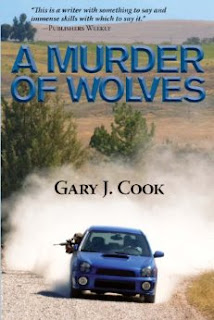 Here’s another book that came over the transom at BITS, not the usual fare here, but its Montana writer more or less dared me to read it. It’s a hard one for me, a western reader, to categorize—call it a political thriller set in the modern-day West. But there’s a good deal more going on between its covers.

Plot.  The novel has three plots. One is the slow and suspenseful unfolding of the other two, a plot and a counterplot involving federal law enforcement and domestic terrorists. By slow I don’t mean it ever flags, at least not for long. It’s structured like a mystery, so that mysterious events transpire and it’s not clear who the villains are or what they are up to. Like the traditional western or spy novel, it’s also a kill or be killed world, with the added factor that characters have ready access to the weaponry of modern-day combat.

The telling of the story itself has many parallels with current Hollywood action-adventure fare. The central characters are a pair of sheriff’s deputies, both highly trained veterans of the war in Afghanistan. Their scenes together are a nonstop flow of banter, as in a buddy movie, even as bullets fly. A set piece in the middle of the novel is a car chase along a busy highway.

The novel even comes with its own product placement (Mountain Dew, Starbucks, Pilates) and a soundtrack. Here’s a song playing on a truck stereo in one scene:

Characters. J. L. “Barney” Lambier and Joe Big Snake Person are the deputies, assigned to an anti-terrorist task force based in Missoula. They report to a hard-nosed FBI agent, Quinn McBride, who scolds them like an older sister barely tolerating the antics of two ungovernable brothers.

Joe Big, a Force Recon marine, is a mixed-blood Blackfeet who is ambivalent about his Indian heritage and just wants to be an “American.” A loner and not a joiner, he has no wish to be a member of the tribe and rejects its exalted mythology, but he admires an uncle whose stealth and mysterious power seem super-human.

Barney, who was trained to the Army Special Forces, is a Southerner, whose wife has just left him. A man obsessively devoted to the pursuit of bad guys, he seems not to miss her or even remember her, which says enough about how that marriage fell apart. His bringing home an STD acquired “in the line of duty” was for her the last straw.

The two men are so thoroughly dependent on each other that they are rarely apart, even talk of moving in together. Joe Big’s father tells him that the two of them are partners, in the old tribal way of men who stole horses and killed together.

For a long while, they reminded me of the two characters in Samuel Beckett’s Waiting For Godot. For the first half of the novel, they idly talk, talk, talk, unable to figure out what’s going on. They don’t understand what they have been assigned to do and suspect (rightly) that there is much they are not being told.

They also are lost souls, playing a dangerous game of cops and killers because that’s all they know how to do. They need each other’s company to keep from reflecting on the deaths they have witnessed and the death that stalks them. At the end, we find them still waiting, no smarter or better informed than they were before, living in the present because the future promises nothing—except maybe to go elk hunting.

Women are not peripheral to the story, but they offer little as a gender to Joe Big and Barney. At worst they are impediments and untrustworthy. At best, they are fine for recreational sex. Otherwise, the prospect of romance and relationship is scarier than terrorists with chemical weapons. Joe Big meets an attractive, intelligent Vietnamese woman with a little boy, whose willingness to attach themselves to him gives him a nightmare.

The title, A Murder of Wolves, is a play on the collective term a murder of crows. The reference may be to the shadowy, murderous band of villains in the novel. I’m not sure. It could also refer to the two central characters, who observe at points that they are hunting down people who are little different from themselves. Cue in more music:

Wrapping up. You could call this post-9/11 or re-entry fiction. As a story about the return of two soldiers to civilian life, it is both. You could also call it a western, as the two elaborately armed characters are what people think of when they use “cowboy” as a pejorative.

The novel is also grounded in the landscape and social milieu of western Montana, which has been filling for decades with out-of-state invaders. Living side by side with Reservation poverty are the wealthy for whom the state is a playground. Next to them are the Earth Liberation radicals trying to turn back the clock to some pristine past that never existed. All are in the novel. Only the blue-collar unemployed are left out of the picture. But you get the picture.

At 416 pages this is a long novel. A reader can weary at points—of the quippy banter or the long build-up to the action. Cook trusts us to stick with him for half the novel as we remain as clueless as the protagonists about who the villains are and what they are up to.

Then there are stretches of action that are described like a frame-by-frame description of a movie scene. The big car chase goes on for 14 pages. Another chase on foot over broken terrain at night gets this same treatment. After a while, mental fatigue can begin to set in. But the novel eventually pays off. It is, from page one to the end, quite a ride.

A Murder of Wolves is currently available in paperback at amazon and Barnes&Noble.
Tweet

Further reading:
Commentary on the novel by Mary Strachan Scriver