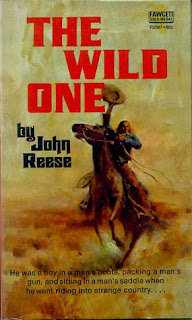 What I most enjoy about a John Reese western is how he takes the conventions of the genre and makes them completely unpredictable. The conventions this time are right there on the cover from the title to the artwork to the tag line:

He was a boy in a man’s boots, packing a man’s gun, and sitting in a man’s saddle when he went riding into strange country…

All familiar and all true as far as they go. But try to guess what actually happens between the covers of this novel, and you’ll be mistaken.

Plot. Its plot is the basic bildungsroman (and there should be a simple word for that in English), a story about the moral and psychological growth of a novel’s main character. You see it over and over in westerns, a young man in his late teens forced by circumstances to take on the responsibilities of adulthood. It usually involves a crisis in which he leaves home and has to prove his mettle, usually with the use of a gun.

That character in this novel is Henry Ely, almost 18 years old, who is already flirting with trouble when we meet him in chapter one. Despite his mother’s warnings, he’s saddling up to meet with a neighbor’s wife for what he half expects will turn into the loss of his virginity. By the end of chapter two, he’s been hunted down by her husband and three sons, who beat him to within an inch of his life.

Thus begins an odyssey that takes him from Texas to a godforsaken settlement in New Mexico, where he gives himself another name, Jack Neely, and takes a job with a horse trader. There he inadvertently crosses a gun slinging outlaw, beats him in a fistfight, and eventually has to defend himself in a gun duel. Having developed nerves of steel by this point, he develops a reputation as a man-killer.

Before long he is working as a foreman for a large cattle and sheep ranch in Wyoming, where he yearns to be his own man. That means running his own business. He has a dream of breeding mules using mustang mares. A partner has his eye on a ranch for sale in the Nebraska Sandhills, if they can somehow raise the money. And there’s this nice little bank waiting to be robbed.

And so on, through several more chapters, as the plot careens onward taking one unexpected turn after another. At the end, Jack (now Henry again) emerges from it all a grown man, having shown his grit by weathering several crises, including the loss of his virginity.

Characters. What makes all this work so well has a lot to do with how strongly characters drive the plot. Henry, as just one example, is so clearly a one-of-a-kind individual. A complicated guy, he doesn’t care whether or not you like him. He’s unsentimental and bonds with other people only as far as he can trust them. Which is not a lot.

He also has a native intelligence and almost animal instincts about dealing with anyone. Laconic, verging on reticence, he discloses little about himself, even to those he respects. An employer and mentor is surprised to discover that he is a talented musician. Acquiring a harmonica from a traveling salesman, he plays this song among others:


From beginning to end of the novel, there is this detached quality about Jack that keeps him something of a mystery. Not given to mulling over things, he operates more on gut feelings, and that means we don’t get pages of him puzzling his way through his dilemmas and uncertainties. Yet he has wits when he needs them. As a buyer and seller of horses, he’s a cunning bargainer, and he has the ability to talk difficult people into doing what he wants. Neither does money slip through his fingers.

The other characters are also sharply drawn and three-dimensional. Given that Jack is prone to woman trouble, there are three of them in the novel to illustrate how they contribute to his education into manhood. Each of them is strong-willed and a force to contend with. And with each there is a specific kind of sexual tension that swings the plot in an unexpected direction.

You realize reading Reese how other western writers rely too much on stock characters, which lead to stock situations and so few surprises. I’ve read only a few of his many novels, but he seems to arrange his characters on a scale of intelligence rather than moral superiority. His heroes are admirable not so much because they are “good” or even “good with a gun,” but because they are smarter than everybody else.

The Wild One is currently available at AbeBooks. For more of Friday’s Forgotten Books, click on over to Patti Abbott’s blog.
Tweet