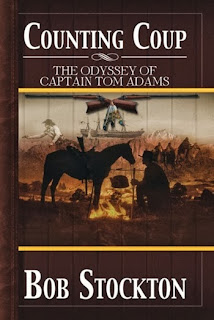 Coup were the bragging rights earned by Plains Indians on the field of battle between tribes. Counting coup was the ceremonial recital of a warrior’s achievements, be they merely touching an enemy, striking, wounding or killing him and taking a scalp. This historical novel is a recital of episodes in the frontier life of trapper, scout, and Indian fighter, Kit Carson.

Plot.  The central character is Tom Adams, formerly a captain in the Union Army during the War Between the States. Adventure has drawn him to California, and the novel is structured around his interviews with Jeb Ford, a man who knew Carson.

Ford is a crusty mountain man who fetches up in Carson City, Nevada, where Adams has taken a job as agent for Wells Fargo express. Much of the novel reads like a verbatim transcript of Ford’s graphic recollections of encounters with hostile Indians. The closing chapters retell the story of engagements between Americans and Californios in the war with Mexico.

Quite a number of other historical figures walk the pages of the novel, including John Fremont, Gen. Kearny, Sam Clemens, and Commodore “Fighting Bob” Stockton, a predecessor of the book’s author. They are joined by a dozen others, unknown or forgotten, ranging from a ship’s captain, a telegraph operator, and a barmaid to “Emperor” Joshua Norton I, a deranged but beloved man who roamed the streets of San Francisco. For me, the most fascinating part of the novel came at the end, where Stockton describes what happened in later life to each of his characters.

Also of interest is what we learn of the Wells Fargo’s express business, running coaches and freight wagons between Sacramento and Carson City, Nevada. And readers get a short history lesson from the days of California’s Bear Flag Republic and General Kearny’s near defeat at the hands of Gen. Pico outside San Diego.

As winter descends in Stockton’s novel (and in Ann Parker’s Silver Lies, reviewed here recently), a reader is reminded of how westerners had to endure snow and bitter cold. The traditional Hollywood western, usually shot in Southern California or Arizona, made the West seem always summery. But the novelist, without needing to resort to special effects, can let the snow fly and the temperatures drop.


Structure. I don’t think it was Stockton’s intention to be “postmodern,” but the novel has an inventive structure that upsets the usual conventions. It begins with Adams’ journal entries describing his journey from New York to California by way of Drake’s Passage. As his ship sails into storms off the southern tip of South America, the trip becomes a harrowing odyssey that Adams expects never to survive.

After his arrival in San Francisco, the writing alternates between these first-person journal entries and third-person description of Adams’ days in the city. As he gets to know Jeb Ford, the narrative flow incorporates Ford’s first person recollections of Kit Carson. Meanwhile, the journal entries continue, though they only recapitulate what we’ve already read.

The novel relies heavily on dialogue, and the effect is often like reading a screenplay. While the book’s subtitle is The Odyssey of Captain Tom Adams, he is not someone we get to know very intimately. However, this will not matter to a lot of readers for whom the novel’s retelling of historical incidents will be of sufficient interest.

Wrapping up. The novel includes photos from the period, and if you have never seen Kit Carson, you may be surprised. In appearance, he was nothing like the handsome actors who have portrayed him on screen. Counting Coup is currently available in paper and ebook formats at amazon and Barnes&Noble.
Tweet