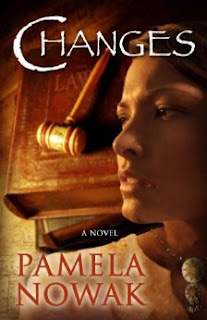 This historical western romance is equal parts history and romance. Set in Omaha in 1879, it tells of a trial that was a milestone in advancing Indian rights. The central character is a young woman, one-quarter Sioux, who falls quite in love with one of the attorneys in the trial.

Plot. Lise Dupree is a survivor of the 1863 Sioux Uprising in Minnesota, which ended in the mass execution of 38 Indians and the tribe’s forced removal to the western prairies. Passing as white, she works as a librarian at the Omaha Public Library, a job she would not be able to hold if her Sioux background were known.

When a small band of Ponca Indians from the Niobrara refuses to be relocated to Indian Territory, they are taken prisoner, chiefly through the effort of an Indian agent, Rufus Christy. Their situation is abetted by a scheming politician, Adam Foster, who has groomed a protégé, Zach Spencer, for election as state senator.

The Ponca are being held by the Army at Fort Omaha without charge. To delay and hopefully prevent further action against them, they sue for a writ of habeas corpus. Spencer as district attorney is called upon to make the case in court in defense of the government. Foster welcomes the trial because it will ignite the anti-Indian vote and give Spencer free publicity in the newspapers.

What gets ignited instead is Spencer’s sudden attraction to Lise as he first meets her while using the library’s law books. And the attraction is mutual. Young and handsome, with a boyish charm, he thrills her with his flirtations. His only fault, in her eyes, is that he’s building a case against the Ponca rather than in their support.

She is already quietly helping Tom Tibbles, the editor of the Omaha Herald, and Susette LeFlesche, whose father is chief of the Omaha. Both are marshaling a legal team and doing research for the Ponca. Sympathetic to their cause is General Crook, commanding officer at Fort Omaha.

Thus is set in motion a courtroom drama in which an argument based on treaty law is pitted against one on Constitutional law. While Indians are not citizens, what’s at issue is whether they are people covered by the 14th Amendment. This dimension of the story is illuminating, and a reader is reminded of the Kiowa chiefs trial related in Johnny Boggs’ Spark on the Prairie, reviewed here recently.

Nowak has done some research, and she has taken most of her characters from the pages of history, including General Crook, Tom Tibbles, Susette LeFlesche and her father, the plaintiff attorneys, the trial judge, and the Ponca chief himself, Standing Bear.

Romance. Sharing the storyline of competing legal and political interests is the romance that flourishes between Nowak’s two fictional characters, Lise Dupree and Zach Spencer. Theirs is an affair heated by intense attraction and frustrated by a variety of obstacles. They are repeatedly drawn together and forced apart again by misunderstandings, divided loyalties, and the meddling interference of Foster and Christy.

Nonreaders of western romances—and I’m thinking mostly of males—will be more than a little surprised by the explicitness of Nowak’s love scenes. The sexual tension builds from the couple’s first encounter. Almost nothing is left to the imagination as their meetings escalate from fevered kissing and groping to unbridled intercourse.

It’s a far cry from the happy but politely decorous attachments between young lovers to be found in western fiction from 100 years ago. In them, one is persuaded that among respectable women—the usual romantic heroines—Victorian standards of behavior prevailed. Heroes waited until the end of the novel for a chaste kiss. This novel’s graphic frankness rather strains credibility by comparison.

There’s not just one romantic couple in the novel. Tom Tibbles has trouble keeping his hands to himself around Susette LeFlesche, often arranging to find her alone at the office, and finally confessing his love for her. She remains steadfastly reserved, reminding him that he already has a wife.

Men. None of the men at the center of the story represent their gender very honorably. Zach may be irresistibly good looking, but he is a boy in a man’s body. He loves candy, and his delight in the presence of Lise makes use of confectionary metaphors: skin the color of honey, eyes the color of chocolate. But in the realm of worldly affairs, he is not his own man, easily manipulated by Foster who uses him for his own purposes.

Foster is a villainous and unscrupulous politician, used to wielding power. Rufus Christy is a sleazebag, a man driven by bitter grievances. Zach’s young brother Thad is a blabbermouth and an eager spy for Foster. The brothers’ grandfather is a drooling, bedridden survivor of stroke. In an opening scene, a sheriff’s deputy takes predatory liberties with Susette as she is arrested with her father. Tibbles is being unfaithful to his wife.

The fault in all their cases is their various attempts to be intimidating. The misuse of privileges that come with being white males makes all of them less likable. Only Standing Bear and General Crook are drawn as honorable men, and they are standouts for both dignity and integrity. Though strongly drawn, each of them is a peripheral character in the novel.

Themes. A central theme has to do with discovery and standing publicly for one’s true identity. For Lise, that is learning that she will never be content living a lie about her Sioux background. Zach Spencer has a parallel problem. Defending the government in the trial, he has to argue that Indians are not people, which finally galls him. He realizes he would rather use his legal skills to defend Indians and has to decide whether he really wants a career in politics.

Some readers will find the novel plotted well enough to suit them. Others may find that sections of it are more tell than show. Lise is anxious and confused through much of the novel and given to mulling over her concerns. These can stretch into pages and get repetitive. They are an apt portrayal of a character who is unsure of herself and keeping secrets from others, but they prevent the plot from moving forward.

Changes is currently available in hardcover at amazon and Barnes&Noble.
Tweet