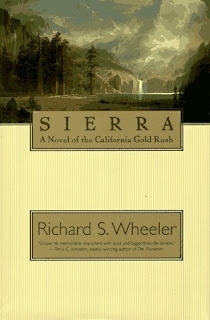 Above all, this is a love story. You may not think so, considering how much of the novel is devoted to the gaining of wealth. But in the end, the effort to get rich turns out to be a dubious enterprise. The four young characters at the heart of the story learn that the love of another is more precious than gold.

Set in the years 1847-1851, during the time of the California gold rush, the novel has the scale and ambition of Larry McMurtry’s Lonesome Dove. It uses a sliver of American history, portrayed vividly and in depth, to deal with down-to-earth human themes. And it’s easily an equal of McMurtry’s novel—often superior to it.

Plot. You get two main plots for the price of one in Sierra, and they only briefly touch each other. One is a love-at-first-sight story of the daughter of a Californio ranchero and a young volunteer just discharged from the Army at the end of the Mexican-American War. The other tells of a newly married Iowa farmer who crosses the continent to look for gold in California, leaving behind his pregnant wife.

The volunteer, Stephen Jarvis, and his novia, Rita Concepción, are star-crossed lovers. Neither speaks the other’s language, and her family is dead set against him. Hoping to put together enough money to marry, Jarvis takes a job at Sutter’s Fort in the Sacramento valley. By chance, he is on a crew building a sawmill for Sutter when gold is discovered in the streambed of the millrace.

In a year’s time, he has acquired a fortune worthy of the girl he has given his heart to, but her family has married her off to a man from a rancho family much like their own. Heartbroken, Jarvis goes into business as a supplier of goods and materials for the wave of gold-hunters descending on California. With a natural head for business, he becomes wealthy many times over.

The Iowa farmer, Ulysses McQueen, has a much different story. Little more than a boy on an adventure, he has a grueling experience from almost the moment he leaves home. Death from disease, accident, and misfortune wait at every step of the way, and he arrives in California too late to make an easy fortune. Meanwhile, he puts off writing his wife back on the farm until she wonders whether he has died. She finally sets off to find him.

That takes you midway into this richly detailed novel. And Wheeler builds considerable suspense as obstacles mount up, preventing the happy reunion of both couples. Meanwhile, we meet a host of characters who inhabit the novel’s teeming social fabric.

Story and history. One achievement, among many, is the way the novel illuminates and enlivens a moment in time already fixed in place by national myth. Wheeler immerses the reader in a tumultuous period of history, at the time of a convulsive leap ahead in economic, political, and social change. His characters are being swept along by forces far beyond their understanding, chief among them their own desire to get rich quick.

Not only are characters unaware of their place in history. They know so little of their own present. The novel reminds us of the length of the news cycle before the advent of electronic communications. Mail delivery is sporadic, and they must wait months for letters to travel between East and West. Characters rely heavily on word of mouth, which may or may not be reliable.

The collective view offered by history transforms in Wheeler’s writing into the individual and personal. While we get a general view of history in the making, the focus is on four characters whose lives and fortunes are being shaped by it. Like people living in any time, they are specific and not generic, a combination of personality and circumstances given to themselves and to nobody else.

Themes. In the stories of its characters, the novel also finds what is timeless. Besides its love stories, it has much to say about character and lack of it. McQueen, despite his youth, exhibits qualities that are the product of a strict Methodist upbringing. He has a strong work ethic and believes deeply in the Golden Rule. He is appalled by a wagon train captain, Dobbin, who abuses his animals and is a ruthless bully in his dealings with others.

Greed has made Dobbin a man without scruple. He’ll stop at nothing to keep others from getting to the gold fields before him. Jarvis watches as greed has a similar effect on one of the men panning for gold with him. The man becomes combative and distrusting, even at his own expense.

The matter of trust figures as a recurring theme, as McQueen and Jarvis each have trouble finding men whose friendship and loyalty they can count on. Both McQueen and his wife, Susannah, learn that their upbringing has not prepared them to be good judges of others. On the long journey to California, Susannah discovers that the unmarried partner of a gambler is more selflessly generous than her God-fearing in-laws.

A member of Dobbin’s party calls the Golden rule “sissy religion.” But doing the right thing for others, man or beast, even at one’s own expense, has a way of being its own reward. Crossing the desert, McQueen and his companions stop at a hot spring, where the water cannot be drunk until it has cooled. Before leaving, they fill several empty kegs to cool for the next travelers behind them. Their act of charity mysteriously lifts their spirits for the long trek across the waterless waste ahead of them.

The novel also concerns itself with the conflicts that arise with the need for independence. All four of its central characters strike off on their own in ways that would give pause to the risk averse. Both Susannah and Rita Concepción defy families determined to force their wishes on them. All four of the characters end up far from their origins by the end of the novel and content to be so because they are with the ones they love.

And in that way, love conquers adversity. Thinking back on the few short years that have transported him from boyhood to manhood, McQueen realizes that he is like his uncompromising father. Both men believe in hard work, honesty, and courage. But unlike his father, McQueen also values love and independence. And so, in him, the several themes of the novel coalesce.

Wrapping up. The research that has gone into the novel is substantial, providing considerable depth of detail. We are witness to the perilous crossing of the continent and  travel across the pestilence-ridden isthmus of Panama. We learn of life in the mining camps and work in the goldfields. We also see the explosive impact of the gold rush on sleepy, isolated, sparsely populated California.

The narrative is told from the points of view of each of its four central characters, and it passes from one to the other, sometimes leaving us with agonizing cliffhangers. Needless to say, in Wheeler’s hands, the writing is clean, clear, and vivid. The tone is mostly matter of fact, while the characters register a broad range of emotions from dread to elation.

Sierra is currently available in paper at Barnes&Noble and for kindle and the nook. Also at AbeBooks. For more of Friday’s Forgotten Books, head on over to Patti Abbott’s blog.
Tweet

Coming up: John Rose Putnam, Into the Face of the Devil