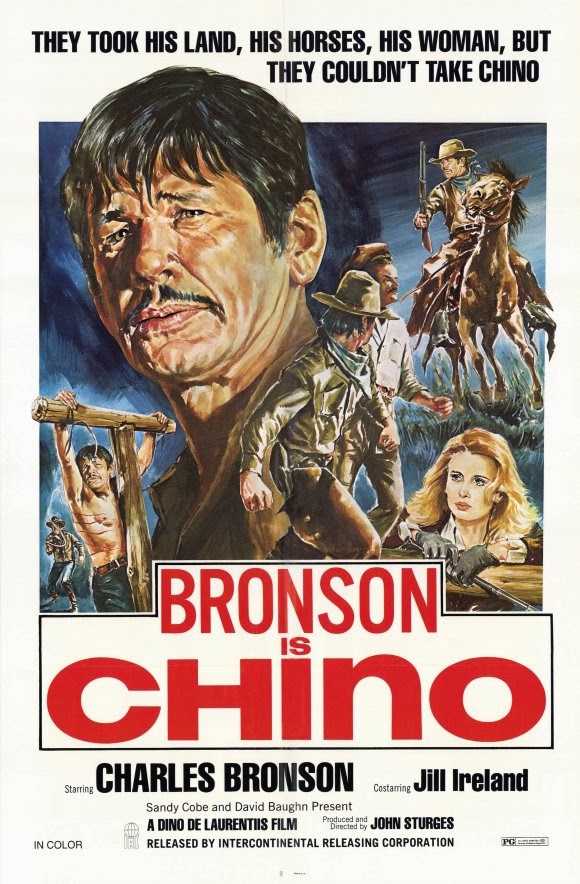 Despite the raggedy and apparently pirated copy of this film currently showing on amazon, this movie shines through as a quiet gem. An Italian-French-Spanish production, shot in Spain, it is not your usual spaghetti western. Based on Lee Hoffman’s The Valdez Horses (reviewed here recently), it is faithful to the heartfelt spirit of that novel.

Characters. Cast as the title character, Chino Valdez, Charles Bronson delivers a persuasive and nuanced performance as a reclusive breeder and trainer of horses. His rough appearance, which can turn a scowl or a grimace into a chilling expression, suits the character of a gruff man who prefers the solitude of a lonely cabin on the open range.

When the youngster Jamie Wagner (played by 16-year-old Vincent Van Patten) shows up looking for work, Bronson at first seems to resent the intrusion. Eventually, a bond builds between them, and the boy becomes a trusted companion.

Romance. The half-sister of a business partner (Bronson’s real-life wife, Jill Ireland) is next to intrude. As she asks him to choose and train a horse for her, he ridicules her for intending to ride sidesaddle. Unaccustomed to western riding, she strikes him as a poor horsewoman, and he has a good laugh.

The tables turn when she finds him taking a bath and, refusing to look away, observes suggestively that he has not only the personality of a horse but the appearance of one. Before long he is courting her, and as they happen to witness Bronson’s stallion mounting a mare, they yield to nature’s urging as well. Very Euro.


However, Ireland’s half-brother (French actor, Marcel Bozzuffi) objects. He attempts to separate the couple, sending his men to beat up Bronson, then killing a prized foal and having Bronson savagely whipped when he remains determined to have Ireland. Once he recovers, retaliation is left to Bronson, and when he is done, he leaves very little for Bozzuffi to salvage. 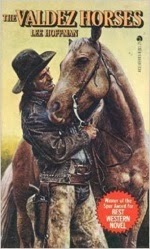 Adaptation. While Clair Huffaker’s script does honor to the novel, a key difference is that in Hoffman’s telling of the story Jamie is the first-person narrator. We do not know that romance has bloomed for Chino and the girl until the boy begins to see the most obvious clues of it.

Instead, the novel recounts Jamie’s growing sexual awareness as he first loses his virginity to an Indian girl, on a visit with Chino to a friendly neighboring tribe of Arapaho. Then he begins to meet white girls at dances in town and feels the stirrings of adolescent love. The movie’s ending also softens the more disturbing one that Hoffman wrote. There’s violence, but more conventional and less shocking. Without the point of view of the boy, the last moments are also less heartbreaking.

Production. Shot in color, the film’s cinematography enjoys the wild terrain of Andalusia, and there are many satisfying long shots of horses in motion. Unlike the fancy camerawork and editing of an Eastwood spaghetti western, Chino uses a style that is straightforward and unpretentious. Its beauty is often in its simplicity. The music track is also well suited to the sometimes elegiac tone of the film: often no more than a melodic acoustic guitar and harmonica.

Meanwhile, the performances are natural and relaxed. Bronson inhabits the role of Chino, and Ireland seems comfortable with him in their scenes together. Surprising is the young Van Patten, whose face easily registers a range of believable emotions. Among the three there is hardly ever a false note. The one weak link in the film is Bozzuffi, who seems stiffly uncomfortable speaking English dialogue.

An watchable print of the entire film is currently available at youtube:

Wrapping up. John Sturges (The Great Escape, The Magnificent Seven, Bad Day at Black Rock) shared directing credit with Italian director Duilo Coletti. Depending on the country released in, one or the other or both received credit on screen. Chino was released in Europe in 1973. Its standard ratio format suggests that it was intended chiefly for TV broadcast. The film was not released in the US until 1976.

Chino is currently also available on DVD at Barnes&Noble, though I cannot attest to the quality of the transfer. For more Overlooked movies and TV, click over to Todd Mason’s blog, Sweet Freedom.