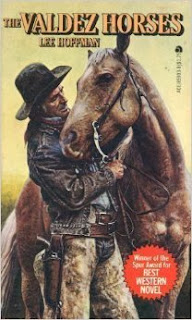 A warning should come with this western novel: “May Break Your Heart.” Hoffman lets the bittersweet sadness of her story creep up on you unsuspected for the length of this short novel rather like Jack Schaefer’s Shane (1949). In a similar narrative device, Hoffman has her story told by an older man remembering an episode from his youth. The boy, Jamie Wagner, is a teenager looking for work when he comes upon the horse ranch of Chino Valdez, a reclusive man of few words.

Plot. Chino does not welcome the boy and has no job for him, but he does not object much as one day leads to the next and Jamie stays on. He does whatever chores he can find to do and watches Chino with his horses. Eventually, he stays for good, and much of the novel is simply about the slow, slow building of a relationship between the two.

Like Shane, there is more than a little mystery about Chino. He is of mixed blood and seems to have left a number of previous places under a cloud of ill will. We learn that he gets violent when drunk. His one prized possession is a formidable stud horse he’s using to build a first-class herd. One difficulty is that he has had to take on a partner to capitalize his operation. The man, Stanhope, lives in town, some distance away, and is rarely seen.

Chino has friends among a local tribe of Arapahoe. He takes Jamie there for an overnight visit that has the boy discovering the very grown-up pleasure of sharing his bedroll with one of the Indian girls. Venturing into town for a dance, he meets more girls who get his head spinning with grown-up fantasies. But trouble brews as Chino takes a shine to Stanhope’s daughter, and their dalliances become a set-up for violence and tragedy.

Enough about the plot. You need to read this one for yourself to get its full impact.

Wrapping up. Lee Hoffman (1932-2007) was born Shirley Bell Hoffman and took to writing westerns in the 1960s after establishing herself as an editor of science fiction. Her novel The Valdez Horses won a Spur Award and was adapted to film as Chino (1973), directed by John Sturges and starring Charles Bronson.

The Valdez Horses is currently out of print and available used in paper and hardcover at amazon, Barnes&Noble, Powell’s Books, and AbeBooks. For more of Friday’s Forgotten Books, click on over to Patti Abbot’s blog.
Tweet