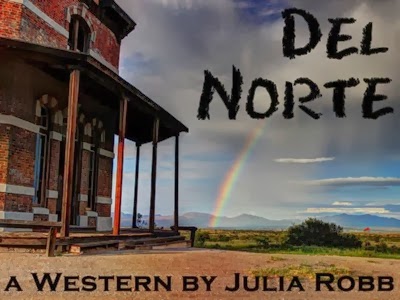 This dark western novella from Texas writer Julia Robb begins appropriately with the gravestone of a murdered man. The stone leans against an interior wall of a saloon, the Del Norte of the story’s title, owned and operated by a Mexican woman, Magdalena Chapas. We’re in a dusty garrison town in West Texas. The year is 1870.

Characters. Robb gives us an ensemble of characters, several men and women who have fetched up on this isolated outpost. The battlefield carnage of the Civil War is recent history for two of the men, who share a memory of deprivation and disgrace in a POW camp in far-off Elmira, New York. Thomas, a decorated Union officer, bears wounds to both body and spirit. Wade is a doctor, a consumptive, and unable to practice his profession because of injuries to his hands.

Another man, an immigrant from China, takes an American name, Johnny, and tries vainly to assimilate as a westerner. A fourth man, Cortez, is a devil-may-care lothario with his boots under the beds of more than one woman unable to resist his charms. Meanwhile, married to Magdalena, he continues to lay claim to her as his wife, as well as all the rights and privileges due him as her lawful husband.

With a wayward spouse, Magdalena has given up on romance and marriage. Having killed her first husband for good reason, she has no confidence that offers of wedlock from her business partner, Thomas, will lead to anything but more grief and disappointment. Besides, she has responsibilities as the mother of an 8-year-old-son, born with a disability.

Themes. This is not the West of myth but a terrain where the social upheaval of the Civil War continues to be felt. West Texas, with its cultural origins in Mexico has been invaded by a ragtag occupying army, as well as civilian drifters from the South and North, and immigrants from Europe and Asia. Meanwhile, Comanches haunt the hills.

The isolation is profound. We are far from the nearest U.S. marshal or anyplace resembling civilization. And the unsettled, lonely lives of the handful of strangers who have converged here offer little in the way of community. The owner of the saloon across the street from the Del Norte is openly contemptuous of his competitor, Magdalena. Her partner, Thomas, reviles the doctor, Wade, who was once found guilty of stealing food from his fellow Confederate prisoners.

Racial hatred is another subject. The Chinese man, Johnny Lan, is its victim as he blithely attempts to make of himself a rich man by marrying a white woman. And a Chinese woman, traveling with him, who has escaped being sold into slavery in America, has memories of witnessing the killing of whites in her homeland.

All of this and a good deal more produce a resolution that involves the use of firearms on the dusty street that separates the two rival saloons, and a reading from the Song of Solomon follows at a burial. It is a conventional ending that seems almost freshly contrived given the complexities of characters and their issues that precede it.

Robb's graphic narrative style is suited to her portrayal of life on the frontier. Here a character rides onto an army post:

A pack of dogs snapped at the legs of his horse as he rode into the fort, barking so loudly he couldn’t hear the troopers drilling on mud-flecked horses. Laundresses in long, white aprons lugged piles of shirts and long johns from the barracks toward the washhouses.

In a saloon, the floor is stained with tobacco spit, and the contents of the spittoons are emptied by a hired swamper into a privy out back.

Wrapping up. Robb has an imagination that breathes life into the western in unexpected ways. Her novel Scalp Mountain (reviewed here a while ago, with an interview) took on racial animosities between whites and Apaches and told a grim adventure story of an abduction in the Rio Grande border country. Del Norte is currently available in ebook format at amazon.
Tweet