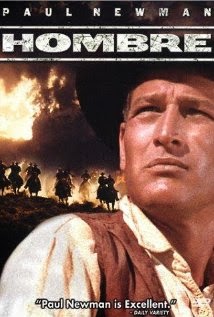 Based on Elmore Leonard’s 1961 novel of the same name (reviewed here recently), this film offers an interesting example of adaptation. The basic plot is unchanged, but the screenwriters have introduced and substituted different characters. The result is a rather different story.

Plot. Leonard’s novel revisits the central situation in John Ford’s Stagecoach (1939). An assortment of stagecoach passengers gets into trouble while crossing a stretch of perilous desert terrain. Instead of a wanted man (John Wayne) who joins them, the pivotal character is a white man raised by Indians (Paul Newman). Instead of undergoing attacks by hostiles, the coach is held up by a gang of thieves.

The gang takes a hostage, the wife of an Indian agent, but Newman kills one of them, and a stolen bag of money is retrieved. Set afoot in the desert with little in the way of food and water, the passengers must reach safety before the gang finds them again to reclaim the money—and either leave them to die or kill them outright.

Characters. Newman’s character, John Russell, besides being twice the age of the 21-year-old created by Leonard, seems very close to the man we find in the novel. He is single-mindedly focused on survival—his own. What the others do, whether they stick with him or not, is their own business. Expressing nothing but cold, calm determination, he seems never roused to an emotion.

The film retains three of the travelers from Leonard’s novel: the Indian agent and his wife (Frederic March, Barbara Rush) and the Mexican driver (Martin Balsam). A fourth (Peter Lazer), the novel’s narrator, is renamed and given a petulant young wife (Margaret Bly), who comes along for the ride.

Another added passenger is a complete invention of the screenwriters. Diane Cilento plays a boarding house operator put out of a job when Newman sells the boarding house she has been running for his deceased guardian. As the one who questions his judgment, stands up to him, and tries to soften him, she seems invented to balance his weight in the cast. She also holds out the prospect of a Hollywood-style romance between the two—which never materializes.

Missing from the cast is Leonard’s “McLaren girl,” a teenager being returned to her family after abduction by Apaches. Her presence in the novel adds a layer to the racial issues being explored by Leonard. She emerges as a gathering storm cloud, aware that the others regard her as despoiled.

The result of this shifting around is the loss of the novel’s narrative economy and its focus. The story has been fleshed out with a side plot involving Cilento and a rogue sheriff (Cameron Mitchell). In the final scenes, as the six passengers take shelter in a mining camp shed, there are too many of them. Scattered on the floor with little to say or do, they lose their individuality.

Ethics. Director Martin Ritt and screenwriters Irving Ravetch and Harriet Frank, Jr., are faithful to the central ethical issue debated by the novel’s characters. While Newman seems to subscribe to a doctrine of every man for himself, the others argue that they are in this together and need to help each other. “Why help?” Newman wants to know. “Because help is needed,” says Cilento, a Good Samaritan and advocate of the Golden Rule.

At some risk, she even extends a helping hand to March, who has cheated a tribe of Indians and is making off to Mexico with his ill-gotten gains. An uncharitable and godless man, he abandons his wife to the cruelty of the gang of robbers. His naked greed and cowardice make Newman’s professed disinterest in the others not so questionable. Helping those who despise and rob starving Indians, he counters, doesn’t say much for Christian charity.

Wrapping up. Both the novel and the film are interesting for raising questions of ethics and morality in the context of a kill-or-be-killed western. I had remembered the film as being over-long and talky, but after reading the novel, I found Newman’s performance absorbing. His John Russell remains enigmatic, and his final act in the last scene invites interpretation as complex as Hamlet’s.

The production of the film involved considerable Hollywood talent besides Newman, veteran actor Frederic March, and Richard Boone in an over-the-top performance as a sleazy villain. Martin Ritt had previously directed Newman in Hud (1963) and is remembered for The Cowboys (1972) and Norma Rae (1979). Ravetch and Frank were screenwriters for all three movies.

The film was shot in widescreen and color in Arizona. Music was composed by David Rose. The minor elegiac tone of the main theme can be heard here:

Hombre is currently available at netflix, amazon, and Barnes&Noble, and it is streamable at amazon instant video. For more Overlooked movies and TV, click over to Todd Mason’s blog, Sweet Freedom.
Tweet