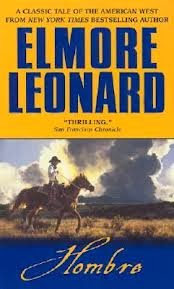 After the muddled The Bounty Hunters (1953), Elmore Leonard’s skill as a novelist took a quantum leap forward with this novel. Hombre is a tense western thriller that is also a fascinating study of an enigmatic character. That character is John Russell, the “hombre” of the title.

The story is set, like other Leonard novels, in southern Arizona. The year is 1884. A stagecoach is held up by road agents, and all the passengers are set afoot in the desert. The robbery doesn’t go quite as planned, and the passengers are able to retrieve a saddlebag full of money. They strike off across the desert, pursued at some distance by the thieves, who have taken a woman hostage.

Character. Russell is a young white man raised during his boyhood by Apaches. The narrator, one of the passengers, believes he is three-quarters white and one-quarter Mexican. There is about him a coolly calculating mentality that often puts him at odds with the other passengers. However, he has superior survival skills, and though he seems indifferent to them, the urge is strong to stick with him.

The premise of the plot is brilliant in its simplicity. Yet there is a complicity of cross-purposes among the handful of characters that allows several stories to be told at once. For starters, if they stay together, do they let Russell make all the decisions? Then does survival depend on confronting their pursuers or running and hiding? 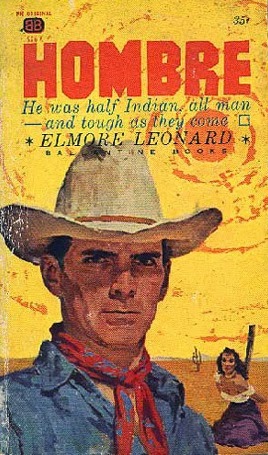 Plot. But the bag of money makes it more than a story of survival. The thieves want it, of course. And so does one of the passengers, an Indian agent named Dr. Favor. However, he has acquired it by defrauding the U.S. government and leaving the Indians in his care to starve. Far more sympathetic with the Indians, Russell wants the money to go to them.

A further complication is Favor’s wife. She is the one taken hostage by the thieves. Leonard doesn’t want us to care greatly about her. Early in the story, she makes bigoted remarks about Indians and then makes Russell take a seat outside the coach with the driver. Also, there seems to be little affection between her and her husband. As they ride through the night, she gets cozy with another male passenger.

Complicating matters further is water, which is in short supply and worth even more than the money. Russell attempts to regulate its consumption by the others as they are fleeing from the scene of the holdup. Favor uses it to defy Russell’s authority. Later, it becomes a bargaining chip in negotiations with the thieves.

Themes. Fueling the charged racial feelings in the story is the presence of a white girl among the passengers, referred to always as “the McLaren girl.” She has recently been rescued after being abducted for a brief time by the Apaches. The others have an unseemly interest in whether she was sexually molested (“bothered” as Mrs. Favor puts it) during her month of captivity. 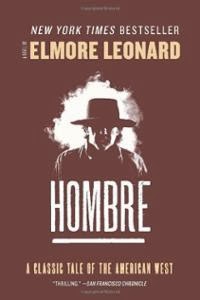 When Mrs. Favor is taken captive herself—by the thieves—she becomes a bargaining chip as well. They threaten to shoot her if Russell won’t turn over the money, and he says, “Then shoot her.” It is the McLaren girl who challenges his apparent indifference to the woman’s welfare. “What makes you want to help others?” he asks her. “Because they need it,” she tells him angrily. And so his Indian-like emotional detachment is pitted against her belief in human charity and the Golden Rule.

In another novel, this conflict—self-preservation vs. coming to the aid of others despite the personal cost—would play out differently than it does here. And I’m not giving away how it’s resolved, except to say that Russell’s motivation remains open to question to the end. Have his choices all along been those of an Indian or a white man? Or is Leonard saying, that’s not the point.

Structure. Leonard keeps the issue ambiguous by using a first-person narrator of very average intelligence. Carl Allen, 21 years old (and the same age as Russell), is often guessing what other characters are thinking, but he remains mystified by Russell. Beyond a certain point, the man is a puzzle to him. Impossible to fully figure out.

Writing his story over a period of three months, he says, he has made a mighty effort to correct the rumors and assumptions of others who were not there. He (and Leonard) leaves us finally with the estimate of Russell’s character given him by someone else at the beginning: “You will never see another man like him as long as you live.” 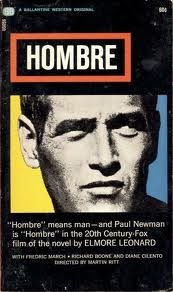 Wrapping. Readers who have seen the Paul Newman western, Hombre (1967), will get a somewhat different story. We get a different set-up at the beginning, a different mix of characters among the stagecoach passengers, and an older John Russell. Newman was 42, though he surely has the blue eyes of Leonard’s 21-year-old character.

The screenwriters also invented an additional villain, who was played by Richard Boone. I found the novel to be tauter, more suspenseful, and less talky than the film. The novel’s first-person narration may be partly responsible, as it gives an attitude that is missing on screen and a different kind of immediacy.

Hombre is currently available in paper and ebook formats at amazon, Barnes&Noble, Powell’s Books, and AbeBooks. For more of Friday’s Forgotten Books, click on over to Patti Abbott’s weekly blog.
Tweet