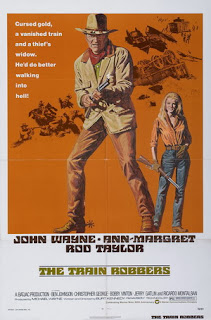 This John Wayne western should be better than it is. Individual parts of it are notable, but put together, it’s a 90-minute lead-up to a surprise ending. Wayne plays himself in the role his fans love—gruff and no-nonsense but with that disarming grin.

The all-star cast includes Ben Johnson and Rod Taylor, both at their relaxed best. The hyphenated Ann-Margret provides the required female component. Ricardo Montalban, like someone looking for Fantasy Island, watches from afar and puffs on long cigars.

Plot. This is a Burt Kennedy film, directed from his own script. So the elements are familiar—a long trek across hostile terrain with several men and a woman. This time around, it's an assembled gang of former partners in crime accompanying the woman, who enlists them to retrieve a half million in stolen gold. It is stashed in the desert in an abandoned train locomotive.

Wayne and his gang agree to help her find the gold so she can return it and supposedly clear the family name of a deceased husband, while Wayne and his men collect the reward. An immediate problem as they ride off together is that they are being followed by a troop of riders eager to separate them from the gold once it’s found.


There’s a big shootout when they arrive at the locomotive, and though they thin out the ranks of their pursuers by half and scatter their horses, they still need to get back to civilization. Which happens to be a ghost town with a set of train tracks running through it. The conclusion then comes with a bang—several of them—as dynamite is used to rout the last of the would-be thieves who have been following them. Fire levels several buildings, adding to the nighttime spectacle.

All of this you have seen before in other westerns, and the difference is that a lot of talent has been put
to the task of making this version of the material bigger, flashier, and noisier. Also sexier, as Ann-Margret is persuaded by Wayne to dress so that her curves and points show—thereby discouraging gunfire by those in pursuit. (Meanwhile, you’re thinking, wouldn’t having her wear a dress instead of tight jeans do the job even better?)

Highlights. For me, Ben Johnson is always a pleasure to watch on screen. Born in Oklahoma he comes by his southern-plains talk and mannerisms naturally. He has always been convincing in cowboy roles. Here he gets a good share of the script, including a long scene with Rod Taylor in which they talk with some self-deprecating amusement about growing old. He plays part of one action scene with a chaw of tobacco in his cheek.

More of an anomaly than a highlight is finding pop singer Bobby Vinton (“Blue Velvet”) as one of Wayne’s men. To his credit, he seems more comfortable in a western than Ricky Nelson in Rio Bravo (1959). He plays the youngster of the group, unsure of himself, occasioning a lecture on manhood from the Duke:

You’re a man, you’re stuck with it. You’ll find yourself standing your ground and fightin’ when you oughtta run, speakin’ out when you oughtta keep your mouth shut, doin’ things that seem wrong to a lot of people but you’ll do them all the same. You’re gonna spend the rest of your life getting’ up one more time when you’re knocked down, so you better start gettin’ used to it.

This might well sum up the John Wayne credo. It describes just about every western hero he ever played. Ann-Margret tries to take some of the wind out of his sails by finding fault with him. “All you do is drift,” she says at the end. He gives her one of his looks and says, “It’s what I’m good at.”

The opening credit sequence is iconic and seems inspired by spaghetti westerns. The scene opens on a desolate stretch of railroad tracks with a few scattered buildings that look deserted; we see some horses in a corral. Wind blows clouds of dust. Ben Johnson stands looking up the tracks and waiting. A sign, “Liberty, Texas,” creaks in the breeze. Vinton appears at the top of the water tower, where he’s been taking a bath, and calls down to Johnson. Three minutes have passed with only the sound of the wind blowing; no music. Nice.

The Train Robbers was filmed in Technicolor and Panavision and shot on location in Durango, Mexico. It is currently available at netflix, amazon, and Barnes&Noble, plus amazon video and nook video. For more of Tuesday’s Overlooked Movies and TV, drift on over to Todd Mason’s blog, Sweet Freedom.
Tweet