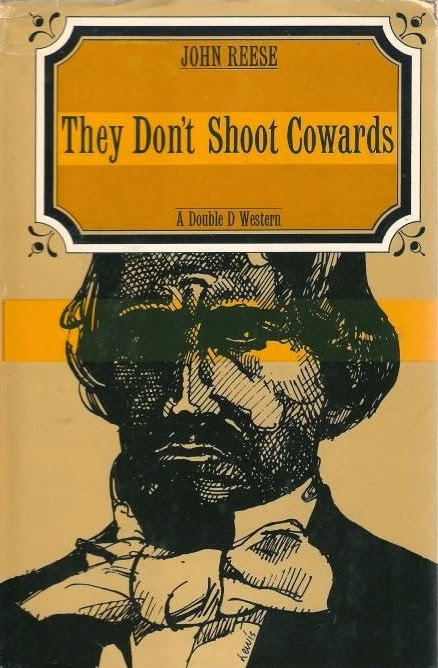 In a John Reese western, nothing is likely to be what it seems. Despite a wide, well-traveled trail across the genre’s terrain, you can expect Reese to take you someplace you haven’t been before. Try guessing what this novel is about from the title, the cover art, and the cover copy (“Cahoon had a killer’s reputation and a yellow streak down his back”), and you’ll be maybe 10% right.

Characters. The premise of the novel is actually not so unusual. A man has acquired a reputation as a gunman, but has nothing of the required constitution or skill. Honker Cahoon’s is the story of an ordinary drifter cowhand trying to keep from attracting trouble. The problem is his frighteningly scarred face and a peculiar disorder—like a form of Tourrettes. When terrified, he explodes in angry outbursts so threatening that even the meanest men are intimidated.

And Reese gives his condition a further twist. Cahoon loses his hearing during these episodes and has no idea what he is saying. He lives in fear that someday he will meet a real gunman who decides to draw on him.

He is befriended early in the novel by a 14-year-old runaway, claiming to be 18, whose name, Johnny Smith, sounds so fictional Cahoon calls him Beansie. Against his better judgment, Cahoon cannot resist entertaining the impressionable boy with tall tales of imagined confrontations with notorious gunmen. The two get a job in a bustling mining camp in the California Sierras, supplying slaughtered beef for Bill Shenker, the owner of a highly profitable tent saloon.

Trouble brews as the camp’s merchants hire a gunman, Dewey Score, to provide protection from a criminal element, and they grant him the authority to collect his own pay. Soon he is raising the price of his services and demanding a share of Shenker’s substantial profits. Thanks to young Beansie, who never misses a chance to brag about Cahoon’s assumed prowess with a gun, the two men are destined to confront each other.

Narrative style.  I have seldom found anything resembling a through-line in a Reese novel. While what’s at stake remains an undercurrent in the story, the plot takes a zigzag course with one unexpected turn after another. In this novel, we are meant to dread the eventual moment when Cahoon finds himself face-to-face with a killer and no way to escape. But a steady flow of diversions keeps postponing that eventuality.

There is, for instance, the introduction of a gambling tent at the camp featuring something called Mouse Roulette. Suddenly Cahoon and a late-arriving character, Smoky O’Neill, are running a lucrative scam on a horde of gaming miners. And ironies proliferate, especially as chickens come home to roost in the final chapters, a development confounded by the sudden disappearance of the mine owners on payday.

Wrapping up. This may sound like a genre-spoofing kind of comedy, but while Reese is having fun, he isn’t just fooling around. His West is a hardscrabble world where humor and menace exist side by side, and characters are unmistakably human. Cunning and bluff count for something, but chance and circumstance rule their lives, despite their best efforts and intentions. Truth is stranger than fiction, Cahoon observes as he escapes unscathed in the final paragraph. “In time,” we are told, “he might get used to it.”

They Don’t Shoot Cowards is currently available in hardcover at AbeBooks. For more of Friday’s Forgotten Books, click over to Patti Abbott’s blog.
Tweet