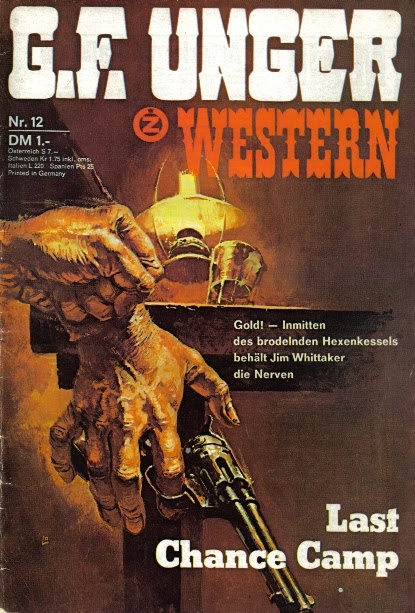 G. F. (Girt Fritz) Unger was the Louis L’Amour of German western writers. Over more than half a century until his death in 2005, he wrote, by one count, 742 western novels, selling over 300 million copies. Born in 1921 in Breslau, he studied mechanical engineering and served on a U-Boat during WWII, until he was captured by the British.

After winning a prize for a radio play in 1949, he took up novel writing, producing sea adventures until trying his hand at westerns. Giving up a job as construction supervisor for Siemens, he became a full-time writer in 1951. Like his American counterparts, he published under various pen names. At the time of his death, he left a number of unpublished manuscripts, which have seen print posthumously. A number of his novels are currently being released (in German) by Bastei Entertainment as ebooks for the kindle.

Overcoming a lifelong aversion to German, I picked a title at random, Last Chance Camp, and have been reading a page a day with the help of a German-English dictionary. I can say that from what I have read so far, the book is a corker.

Plot. The hero, Jim Whittaker, shows up at a gold mining camp much like Deadwood. He is the sole survivor of an Indian attack on a cattle drive. He has lost everything, including his boots. Riding into camp, starving, no saddle, shirt torn, and barefoot (barfussig) he is approached by a cook offering him $100 for his horse (Pferd). Meat is in short supply.

Whittaker says no thanks, but when he returns from a satisfying meal to look for his horse, it has disappeared. Some well-armed and mean-looking ruffians are there instead, and he learns his horse is already being turned into horsemeat. When he objects to the theft, they ask whether he wants the money or to fight about it. He takes the money.

By the start of chapter 2, he has also been persuaded to take possession of an abandoned claim. Although he is told with some Schadenfreude that it is worthless, he is determined to find gold. On a trip into camp for supplies and another meal, he meets a pretty woman serving diners in a restaurant. She turns out to be the widow of a man who had once been his friend—shot dead, she tells him, by a notorious gunman there in the camp. And so we have the set-up for a story of revenge against difficult odds.

Style. The elements of the story are familiar. The central figure is a young man, a Texan, who has already proved his courage and stamina by escaping from an Indian attack. Glad to find sanctuary at the camp, he discovers it to be an environment dangerous as the open range, many of its inhabitants no less hostile than the bloodthirsty Indians. He is a man on his own in a fight for self-preservation.

The narrative is told in the present tense, which is a small advantage for this reader, for whom past tense would be an added challenge. The text is sprinkled with English words: Saloon, “yeah,” Revolver, Cowboy, Dollar, Colt, Indian, etc. Though many of the author’s titles are in German, Last Chance Camp, like others, is in English. The characters’ names are also English, though it would not be inauthentic to use those of any immigrant, including German.

Wrapping up. In his novels, Unger once said, he wanted to show the importance and necessity of strong moral principles, honesty, decency, and courage. These correspond to the selfless ethical code found in the traditional western hero as conceived by American writers, who typically emphasize his respect for fairness and the Golden Rule.

Unger also said that the chief motivation of his cowboy protagonist is the defense and maintenance of his honor. This may ring a little false at first for an American reader, for whom “honor” may sound lofty and self-serving. But you only have to recall the gun duel at the end of The Virginian, which turns on whether a man faces a villain or shames himself by running from a fight. The need to maintain personal honor is strong in him and it cannot be denied, even if it means taking another man’s life.

I remain amazed by the way the western has crossed national boundaries, and maybe I shouldn’t be. The mythology reflects and absorbs big issues for its fans in ways we only half understand. The fight for justice and the need to preserve one’s honor are flip sides of the same coin. It lies behind everyday headlines reporting strife and struggle around the globe. And it’s the paradox at the heart of the western.

To see what the novel looks like as Unger wrote it, you can “look inside!” at amazon. For more of Friday’s Forgotten Books, click on over to Patti Abbott’s blog.
Tweet