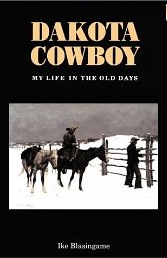 Of all the cowboy memoirs, this is one of the best. Ernest "Ike" Blasingame was barely twenty when he went from Texas to South Dakota in 1904 to cowboy for the Matador Land and Cattle Company on range land leased from the Cheyenne River Indian Reservation. His account of that experience covers the next 7-8 years.

It's a well-told story full of memorable incidents, cowmen, and horses. There's an excellent balance between informative explanations of the work of cowboys on the ranges and amusing anecdotes, accounts of mishaps and accidents, and nicely drawn descriptions of personalities and behavior revealing depth of character (or lack of it) among his colleagues.

The roll of the seasons and the extremes of weather are well described, including the fatal winter of 1906-07. Indians figure prominently in the narrative. You can also get a good understanding of the cattle industry itself in the years before the West was transformed by homesteading settlers and small farmers. Demon rum has a role to play in the fortunes and misadventures of these men. Meanwhile, there are insights into the social history of the all-male, bachelor work force who performed the hard labor of working cattle.

Remembered and told 50 years later (the book was first published in 1958), Blasingame tells his story as though it happened yesterday. It is full of youthful enthusiasm and wide-eyed enjoyment of his work. His reputation grows as a fine young bronc rider, taming the company's unbroken horses. He's also proud of winning the respect of the men he works for, who quickly trust him to rep for the Matador at roundups on other ranges.

It's not clear how much of the writing is really Blasingame's. He gives credit to his wife "who wrote this while I talked." And it may well be she who gets the credit for this lucid, well-organized, vividly described memoir. At any rate, as a joint project, it provides a wealth of information and entertainment for anyone interested in the real West of working cowboys. It's another classic. And thanks to the University of Nebraska Press for keeping it in print.