BITS is one year old

A year ago today it was John Wayne’s birthday, and it was also the first day of BITS. I’d found Laurie Powers’ blog about pulp westerns, and on impulse I decided to try out blogging for myself. It all began with a birthday wish for the Duke.

I’d acquired a stack of westerns on DVD and thought I’d use the blog to collect my thoughts as I viewed them. I’d also begun reading early westerns out of curiosity about that period of history (1900-1915). Writing reviews of those novels came as an easy way to record what I was learning.

My TBR list of early westerns grew and grew as I found more and more early western writers. After going through the dozen or so that were available to borrow from the LA Public Library, I bought a nook and began downloading them – mostly free because they’re all public domain. The list, by the way, has grown to 35.

A realization. After a few months, it came to me that I was accumulating material for a book on the subject. And so my posts began to be abbreviated versions of chapters I was writing. That’s a plan that’s slowly coming to fruition, and I’m hoping by the end of this summer to have made enough progress to see it through. A friend who's a fine graphic designer already wants to do the cover.

During the past year, I have also come to know some fine people who are bloggers and dedicated writers. They’ve introduced me to a world of pulp and popular fiction I knew little about a year ago. As readers, they’ve also pointed me to books and writers I would have taken a lot longer to discover on my own – if ever.

Also, as an old English major, I’ve become alienated from what has happened to the study of literature in the universities. I can understand some of the theory-based criticism that fills the journals and classrooms now, but for me it doesn’t deepen the pleasure of reading. How much more gratifying it is to be among the readers here, who read for fun and an appreciation of the craft of storytelling. I’m grateful for that.

Another curious thing. At some point when it began to look like book publishing was suddenly going digital, I began buying hardback books, like I hadn't for years. A stipend from my employer went to acquiring a six-foot stack of them, mostly used, library discards, and remaindered, like artifacts rescued from oblivion. Again, most are books that a year ago I didn’t know of and wouldn’t have guessed I’d be reading, let alone buying.

But here are most of them, and I’m tickled to call them mine (Beat to a Pulp and some others missed the photo shoot, and I couldn't figure out how to include those ebooks): 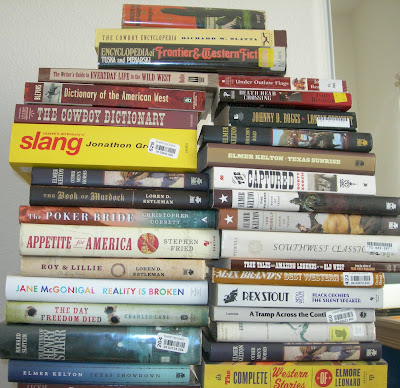 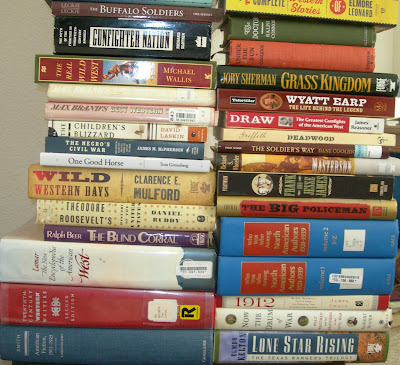 Little of this would have happened without the interest and encouragement of those who follow this blog and take a moment now and then to comment and to acknowledge the comments I’ve made on their blogs. I’d like to name those reading this who have meant the most to me, but if I did, I know I’d leave someone out. I’m just hoping you know who you are.

Tomorrow begins year number two, and it feels like I'm still the new kid on the block. I’ll count myself lucky if the coming months unfold with continued discoveries and happy surprises like the year that has just passed.