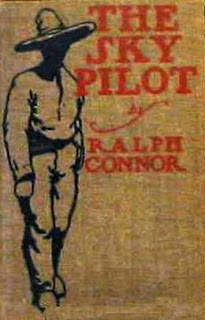 [Originally posted last Thursday but lost in the meltdown.]

Ralph Connor was the pen name of Charles William Gordon (1860-1937), a Presbyterian minister of some prominence in Canada. The story goes that he’d wanted the name Cannor, with reference to his early pastoral experience in the Canadian Northwest Territories. But a typographical slip-up left him with the name he made famous, Connor.

And The Sky Pilot was the novel that made him famous. It sold over a million copies, as did two of his later novels. It is set in a frontier community, Swan Creek, in the foothills of the Rockies, west of Calgary. Its characters are early settlers, ranchers, and cowboys, and at the center of them is a church missionary, Arthur Wellington Moore, who is quickly dubbed “the Sky Pilot,” a nickname that sticks with him.
Supporting characters. The story is told by the local schoolmaster, another newcomer, who has no role to play except as an observer. The preface sets the tone as well as the story’s moral universe:
The measure of a man’s power to help his brother is the measure of the love in the heart of him and of the faith he has that at last the good will win. (p. 7)
The story concerns the winning of the hearts and minds of the men who have retreated to the lonely valleys beyond this frontier outpost to “forget and be forgotten.” Free of social constraints, they live “fierce and hard” lives. Among them are a host of working cowboys, long denied “the gentler influences of home and the sweet uplift of a good woman’s face.”
There is a small fraternity of these men known as the Noble Seven. At its center are young men of high born families in England. One of them is a remittance man known only as “the Duke.” They drink, gamble, hunt, and have all the skills of western horsemen. Among them is a top-hand cowboy, Bronco Bill. He’s foreman for a local rancher, who’s been there so long he’s known only as the Old Timer.

The plot. The Pilot’s mission effort doesn’t really get off the ground for a while. To show, apparently, that God works in mysterious ways, progress waits for the Old Timer’s 15-year-old daughter, Gwen, to enter the picture. Wild at heart, she is the mythical girl of the West, a free spirit on a spirited horse. She even talks the lingo of the local Blackfeet tribe.
Encouraged by the schoolmaster, who has little luck in trying to teach her anything, she unwillingly takes catechism lessons from the Pilot. He doesn’t make much headway with her either. She’s learned to do as she pleases and has no patience for “being good.”
This all changes when she is badly injured while rescuing a ranch hand from a stampede. Learning that she will never walk again, she comes around to the Pilot’s view that God’s love doesn’t rule out nasty accidents for little girls.
The Divine plan, it turns out, is to build a church for the little congregation in Swan Creek. The Pilot’s wishes in this matter, however, are stymied by the stubborn resistance of a well-off Scotsman, Muir, who doesn’t want to part with his money. A delegation of cowboys who have befriended the Pilot decides to intervene.
The result is not unlike hiring a motorcycle gang for crowd control at a rock concert. Bronco Bill cleverly maneuvers Muir into a wager. If Bill can come up with $500, Muir agrees to chip in $200. The cowboys, of course, come through with the money, though not without the ethically-challenged sale of a horse. And by Christmastime, the church gets built.
Character. Connor gives us some rough characters. Cussing, carousing, and civilization-averse, the narrator says, they are “brown, spare, sinewy and hard as nails.”
They live in open disregard for everything sacred and with a cheerful skepticism. One of them lamentably dies of his excesses, and only then do they show themselves susceptible to tender feelings. The dying man’s friend, the Duke, is at his bedside, and there is a touching farewell between them.
Turns out, the men are not what they first seem. Eventually, the Pilot discovers their natural generosity and sense of fair play and succeeds in bringing out the best in them. Under his guidance, they delight in embracing a muscular morality and the manly virtues celebrated in the stories of courage and strength to be found in the Bible.
Wrapping up. So it’s a western story without villains. Yet death stalks the closing chapters anyway. Instead of a shootout that concludes a struggle between good and evil, as in The Virginian, this novel ends with the death of the man who has been its moral center. The Pilot grows exhausted and ill and dies, unable to be present for the opening of the new church.
The ending is somewhat biblical in the way it brings to mind the death of Jesus, as told in the gospels. The Pilot’s “followers” gather to mourn the death of a brave, good man who sacrifices himself and dies long before his time. This is a narrative groove one might expect from a writer who is a man of the cloth.
Connor went on to write many more novels. It is said that his experiences as a chaplain during WWI deepened his moral philosophy, and he served 40 years as a minister at a single parish in Winnipeg. He continued writing throughout his life, and in 1972 his Works, containing 43 titles, were published by the National Library of Canada. 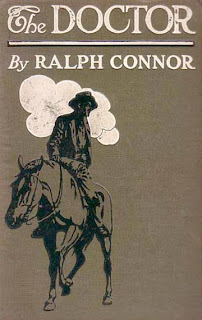 One of his novels, The Doctor (1906), was in a small collection of books in the attic of my grandparents’ farmhouse. Not a book collector at the time, I have often wished I’d held onto it. Now that I know its author, I look forward to getting a copy and finally reading it.
The Sky Pilot is available free online at googlebooks.
Image credits: Wikimedia Commons
Coming up: Kate and Virgil Boyles, Langford of the Three Bars (1907)