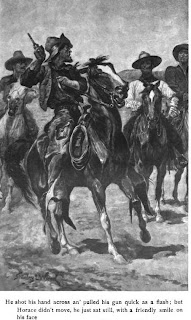 At 448 pages, this novel is as rambling as its full title: Friar Tuck, being the Chronicles of the Reverend John Carmichael, of Wyoming U.S.A., as set forth and embellished by his friend and admirer Happy Hawkins and here recorded by Robert Alexander Wason.

Happy Hawkins, the novel's first-person narrator, had already appeared as the title character of a previous novel, Happy Hawkins (1909). Like Wister’s Virginian, Happy doesn’t do much actual cowboying. Riding for the Diamond Dot, he and his pardner Spider Kelly may get sent out to round up cattle and ponies. But their efforts are typically sidetracked by more compelling distractions.
Religion on the range. The title character, Friar Tuck, is an itinerant preacher who wanders in and out of the action. Preachers in western novels are usually sanctimonious hypocrites or up to no good. Friar Tuck is neither. Committed to nonviolence and believing there’s goodness somewhere in even the meanest bastard, he has an amiable homegrown philosophy. 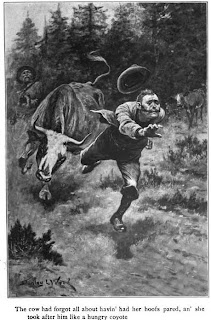 Not surprisingly, he’s out of place on the frontier, where religion of any kind finds few followers. He’s a voice crying in the wilderness, but he’s undaunted. One by one he manages to get sinners to give him a hearing, if not to repent.
He’s an advocate of what today would be called the social gospel. Life’s ills, he says, come from poverty and are the result of selfishness and greed. Despite the bruising conditions of life on the frontier, he won’t give up in his fight there for kindliness and decency.
Competing moralities. The novel is really about differing ideas of morality, one of them based on the Bible and advocating the universal brotherhood of men. The other is espoused by a lapsed church goer, Horace, who bases his values on the ancient Greek ideals of beauty, love, and harmony.
Both points of view merge into a Utopian vision by the novel’s end. In a long siege of the ranch belonging to a villainous cattleman, there are numerous casualties and a knife fight by candlelight in a dark tunnel. Then in an extended epilogue, the place is transformed into a kind of commune where bad men are redeemed and peace and industry prevail. 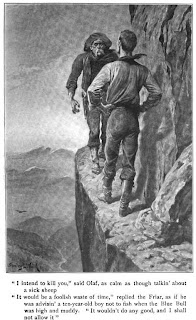 Style. Happy has a leisurely storytelling style. As Wason explains in the foreword, Friar Tuck is “told” not “written.” The book’s unhurried pace is meant to reflect the progress of a man on horseback, with a spare horse and a bedroll, who stops along the way whenever he feels like it.
Happy’s cowboy irony is in fine form, and he has a gift for novel analogies. Here’s a sample: “cautious as a glowworm in a powder-mill,” “noiseless as cider turning into vinegar,” “hard to forget as a split lip,” “personal enough to make a bar-tender blush.”
About a waitress in a saloon, he observes,
She wasn’t a bad lookin’ girl, except that she drenched a feller so constant with her feminine charms that she washed away any hankerin’s for ’em he might have had to begin with. (p. 340)
Remarking on another man’s lack of good sense he says,
His judgment wasn’t such as to make a yearlin’ bull willin’ to swap. (p. 205)
Remarking on a man’s lack of agility with a gun, he says,
He had been so blame harmless he couldn’t have shot an innocent bystander. (p. 196)
Happy is an authentic creation. He has the cowboy attitude, which is to do your job the best you are able and have whatever fun you can the rest of the time. Situations may call for courage, but needless heroics are left to the foolhardy. 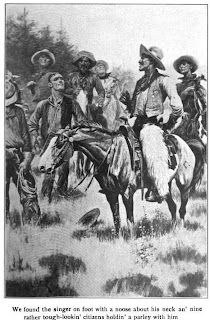 Wrapping up. About author Wason (1874-1955) there’s little to be found in the standard references. Given this convergence of social and moral issues, it’s no big surprise that he identified himself in Who’s Who as a socialist. His biographical sketch there portrays him as leaving high school after one year, clerking in a general store, serving in the Army during the Spanish-American War, writing fiction, and tramping and “roughing it” in the West.
Wason has a half dozen or so novels to his credit and a handful of stories in the early pulps. Another Happy Hawkins novel, Happy Hawkins in the Panhandle, was published in 1914. His last novel-length work was a science fiction serial, The Man Who Never Died, which appeared in 1915 in Bernarr Macfadden’s health and fitness magazine, Physical Culture.
Using the western novel as a vehicle for ideas about wholesome living and right thinking is not a novelty in this period. Wister used the western setting and cowboy characters to explore the nature of character. Where the novel parts company with its peers is the layer of social philosophy. The mythology of the West is almost crowded out by a blend of political and religious ideas. It almost works, and you wonder if, in other hands, it ever might have.
Friar Tuck is available free online at google books.
Illustrations from the novel: Stanley L. Wood
Coming up: Ralph Connor, The Sky Pilot (1899)
Posted by Ron Scheer at 5:50 AM