Kate and Virgil Boyles, Langford of the Three Bars (1907) 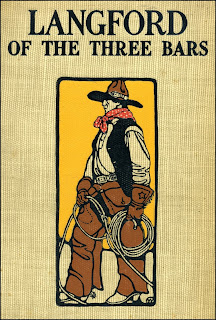 Here’s a first for BITS, an early western novel written by a sister-brother team. Their story is set in western South Dakota on the lawless frontier, and each is apparently writing of the West from personal experience. According to one source, Kate Boyles (1876-1959) was born in South Dakota and went to college in Yankton. Her older brother Virgil (1872-1965) was a court reporter, lawyer, and judge, probably in that order. She seems to have provided the sentiment in the novel; he the courtroom drama.

Let’s start with the title character, Paul Langford. He has his own ranch and, for a young man, is apparently doing very well. Full of youthful energy and idealism, he’s a man of principle and vision, a born leader. Like the Virginian, he’s also a handsome cowboy and a thoroughly eligible bachelor. He’s described as “a godlike type, with his sunny hair and his great strength . . . big, ruddy, self-confident” (pp. 28-29).
As is often the case in early westerns, there’s trouble with cattle rustlers. A gang of them, led by a blackguard named Jesse Black, has been thieving freely. They rule the open ranges of western South Dakota by intimidation, and no effort to put them behind bars has met with success. 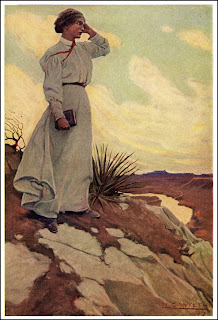 A young lawyer, Dick Gordon, has tried for years to bring justice to the county of Kemah, but jury after jury has failed to convict. He is despondent from repeated failure. His only support comes from his friend Langford and a small rancher, Williston, who is struggling to make a go of it on the prairie with his daughter Mary.
To complete the picture is the heroine Louise Dale who arrives by train from back East to work for a while as a court reporter (which makes a welcome change from the stereotypical schoolmarm). She has bravely ventured beyond the comforts of civilization, even if they are only those to be found in Yankton. But there’s more out here than she bargained for.
The plot. Like The Virginian, the novel is a blending of two storylines. One involves bringing the rustler Jesse Black to justice. The other is a romance that eventually brings together two couples: Gordon and Louise and Langford and Mary.
The title of the novel is misleading, since Langford’s heroism is not the central thread that holds it all together. What finally connects all its parts is a broader theme, the civilizing of the frontier. In the novel, the coming of the law brings order, and order makes conditions safe for marriage and family. 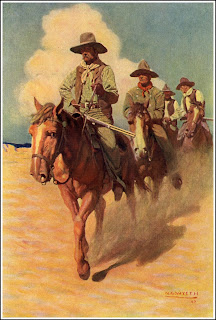 East vs. West. The Boylses do not romanticize the West. Early on, it’s described to Louise as a “wild and unholy land” (p. 32) where a proper woman is at risk of exposure to the “boldness and license of the cowboys” (p. 41). These warnings are borne out by developments in the novel.
While there’s talk of blizzards, Indians, and grasshoppers, only blizzards turn out to be a factor. Indians stay pretty much on the reservation, and someone complains that grasshoppers are hard to find even for fish bait. Still, the authors’ portrayal of the frontier can verge on the bleak side. The vast, barren emptiness of the landscape and the isolation can be cause for loneliness.
Realism. The novel draws often on details that surely come from first-hand experience. There’s frequent reference, for instance, to the odors of animals and humans. A crowded courtroom smells of men’s sweat, tobacco, and the horses the men rode into town on.
A cowboy’s meal at a café in town is comprised of boiled pork and cabbage, baked potatoes, hot rolls, soggy dumplings, and a quarter of a large custard pie, consumed with “noisy draughts of steaming coffee” (p. 52). Also noted is how wet weather converts the roads and trails to thick gumbo that sticks to the horses’ hooves and makes travel difficult. At another point, temperatures nosedive as a winter snowstorm drives cattle from the surrounding ranges into the town seeking shelter. 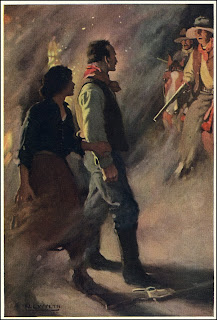 Indians. At worst, the novel’s view of Native Americans verges on the condescending. Louise’s uncle has spent several years as a circuit judge in the western territory. About Indians, he has this to say:
The few I have met seem mild enough. They appear to be rather afraid of me. Their chief occupations seem to be dog-eating and divorce-getting, so you can see for yourself how highly modern and civilized they are becoming. (p. 37)
Half-breeds, on the other hand, are treated with some scorn. Traveling on a train, Louise witnesses the attempt of a half-breed prisoner to escape from custody. Gordon explains to her that many of them are “degenerates”; they inherit the worst traits of both races (p. 88). 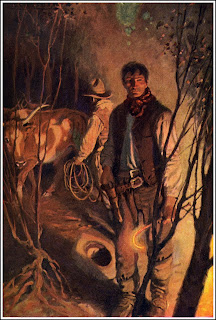 Villainy. The gang of villains in this novel is so black that the leader is even called Jesse Black. Another bad apple goes by the name of Red Sanderson. There’s no subtlety or ambiguity about either of them. Each is a brazen outlaw.
Their lawlessness dominates the frontier. Upstanding citizens and law enforcement are powerless. While Gordon the prosecuting attorney attempts with due process to get them behind bars, they do as they please. Confronted with evidence sure to get a guilty verdict, Black simply escapes through a courtroom window.
There’s no vigilante justice or gun duel in the street, however, to bring his rustling career to an end. Pursued by a posse, he dies finally because he refuses to be taken alive. And at last the back of villainy has been broken. The frontier is safe now for the law abiding and those who earn an honest living.
Langford of the Three Bars is available free online at googlebooks.
Illustrations: N. C. Wyeth; thanks to goldenagecomicbookstories.blogspot.com
Coming up: Jackson Gregory, Under Handicap (1914)
Posted by Ron Scheer at 7:06 AM