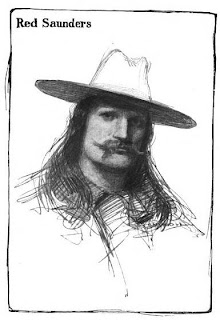 What we have here is a collection of stories by an emerging western writer Henry Wallace Phillips (1869-1930). Phillips was born in New York City but in later years was said to have “spent many years in the West and in Canada as a miner, cowboy, and school teacher.”

These stories feature a larger than life cowboy from the North Dakota plains, William “Red” Saunders. Seems like every outfit in early western fiction has a red-haired cowpuncher. He’s bound to be colorful, and Red Saunders is no exception. His hair, someone notes, is a yard and a half long, and he has a noteworthy mustache. He is physically large, six-foot-three and 250 pounds of broad-shouldered, brute strength.

In appearance, he seems one of a type, dating as he does from the very turn of the century. The long-haired Bill Hickock comes to mind, as does Cherokee Hall from Alfred Henry Lewis’ Wolfville (1897) as drawn by Frederic Remington.

The comic tone and rambling structure of the stories are also similar to Lewis. So is the frontier social network peopled with colorful characters, with names like Wind-River Smith, Agamemnon G. Jones,  Cock-Eyed Peterson, Bronc Thompson, and an Indian named Frosthead.

The stories. Only one woman, Loys, ventures into this company, a college girl from back East who falls in love with cowboy Kyle Lambert over the course of a summer. Red and the boys play Cupid as they help arrange a wedding and a getaway before her rancher uncle gets wind of the romance.

Loys is, in fact, a spirited invention. The cowboys have the usual prejudices against women. Before he meets her, Red says, “I had visions of a thin, yaller, sour little piece, with mouse-coloured hair plastered down on her head, and an unkind word for everybody." She turns out to be a looker, and Red says he’d make a play for her himself if he was ten years younger.

Then, as they’re on their way from the train station to the ranch, she surprises him by happily taking the reins of the team of horses. And while she does this, she expertly holds his hat against the wind, so he can light a cigarette. She was, he discovers, “like a boy.”


This story, “A Red Haired Cupid,” is the most focused of the bunch, with a beginning, middle, and end – in that order. “A Chance Shot” is a yarn about Red encountering a bunch of Indians and being chased by them. “The Golden Ford” starts as a drunken party for a cowboy known as Shadder (Shadow), who’s returning to England after being informed that he’s become a lord. His pardner Wind-River Smith gets tearfully emotional over this development.

Red gets so drunk that when he comes around again, he’s somehow transported himself to Boise, Idaho. There he teams up with another man to prospect for gold, but as each day passes, they get no farther than the saloon. Eventually, they discover gold in a mountain stream where traffic has been using an easy place to ford. They hit upon laying claim to the ford itself and exacting a toll from everyone wanting to cross.

West vs. East. “When the Chinook Struck Fairfield” is a novella about Red’s return to his hometown in New England. Though he's now 40 years old, his energy and personality jolt the sleepy town back to life. With his proceeds as a “gold miner,” he puts some of the locals to work on his cousin Mattie’s house, which has fallen into disrepair.

A likable young man appears, looking for a local business to invest in, and the two men buy a mill to convert into a strawboard factory. Phillips’ apparent point with all this is to show how introducing “western” business practices would pump life into small-town economies back East.

Romance takes a turn in this rambling story as well. Red realizes he’s fallen in love with his cousin Mattie and decides to ask her to marry him. It takes an incident involving a rabid dog to precipitate a proposal. And they all (except for the dog) live happily thereafter.

Types and stereotypes. This early example of a fictional cowboy strikes a chord to be found often again in what was to become the western genre. While the Eastern newspapers featured accounts of cowboy-related killings and mayhem less than 20 years before, this amiable, big-hearted fellow is now becoming a stock character in frontier fiction.

He emerges with a fully developed sense of humor and a wry wit. The stories are told in first person and thus draw on an oral tradition developed to fill idle hours with amusing entertainment. His language is peppered with cowboyisms: “hip-locked,” “ace-high,” “work like the Old Harry,” and “cut the budge.” And “however” always comes out as “howsomever.”

There are allusions to cowboys’ reputation for inventive cursing, all of them rendered as euphemisms: “Sufferin’ Ike!” “Jee-rusalem!” “Brigham Young’s off-ox!” Once Red says, “I cussed for ten minutes straight, without repeating myself once.” Red can even be something of a Mark Twain of the plains, sprinkling his tales with wry quotables like these: “Rheumatism’s no disease for people who can’t swear.” “I like to see a woman blush. It’s a trick they can’t learn.”

Wrapping up. These stories don’t bear up under much analysis. They are fairly light weight. As for real cowboying, there’s little of that in the stories. Red sleeps in a bunkhouse and successfully rides a half-broke, bucking horse until both drop from exhaustion. There’s a lot of heavy drinking and carousing, but gunplay is rare.

Phillips wrote prolifically, mostly for the slicks, from 1896-1916. There were altogether over a dozen Red Saunders stories during that time, starting with "A Chance Shot" in McClure's Magazine in 1900. Four of his stories were made into films during 1917-1918, including “The Fighting Gringo” (1917), directed by John Ford and starring Harry Carey. After his death, one of his Red Saunders stories appeared in the February 1931 issue of Black Mask.

Phillips’ writing career curiously comes to a stop after 1916. Some odd reports in the news about his personal life may shed light on this. Phillips married in 1898 and then separated from his wife in 1908. Two years later, she had him committed to Ward’s Island in New York, the State Hospital for the Insane, where he spent the years 1910-1913.

On his release she sought divorce on grounds of abuse caused by his admitted addiction to Bromo-Seltzer. This headache (and hangover) remedy originated in 1888 and became widely popular. I’ve never heard of a proclivity for this particular nostrum to induce domestic violence or bring the end to a writing career. One suspects there’s more here than meets the eye.

Coming up: Loren D. Estelman, Roy & Lillie
Posted by Ron Scheer at 6:26 AM