One more set of nonHollywood films for the crime fans out there. Three of these go back to 1997, and one is more recent. They come from Russia, Norway, Spain, and England. 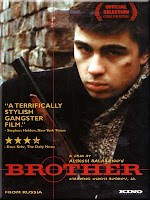 Brother (1997). Intense film by director Aleksey Balabanov set in post-Soviet Russia. At the center of the story is a young man, Danila (Sergei Bodrov Jr.). Discharged -- or maybe AWOL from the army, he arrives in St. Petersburg. There he discovers that the older brother he worships has been doing well for himself as a mob contract killer. Danila decides to follow in his idol's footsteps and very quickly adapts.

Crime and chaos are the new normal, and with a sang froid learned as a fighting soldier, he thrives in an atmosphere of violence. Whether in a kill-or-be-killed struggle against guerrillas in Chechnya or the gang-style world of life on the home front, it’s all the same. Bodrov is a brooding and intense presence on screen. The son of director Sergei Bodrov, he was working in a film by his father in 2002, when he was killed in a rock slide.

Insomnia (1997). If you weren’t crazy about the Hollywood remake of this Norwegian film, you’ll find the original nicely gripping and ironic. Sent to a town in the northern hinterlands of Norway, an ethically compromised police detective lends a hand with a homicide investigation.  Jonas Engström (Stellan Skarsgård) and his partner trail the suspect onto fog-shrouded terrain where a shooting has unintended results.

Engström covers up a fatal error, which leads to even further complications, since the suspect has been a witness. Unable to sleep, he falls victim to the endless days of a far-north summer, where there is no relief in darkness for a guilty conscience. Directed by Erik Skjoldbjaerg.

Live Flesh (1997). Based on a novel by British crime writer Ruth Rendell, this is Pedro Almodovar's steamy spin on film noir. It’s a darkly original psychological study with Almodovar’s stamp all over it - that unmistakable mix of melodrama, steamy scenes of passion, and quirky comedy. Beefy Javier Bardem comes on strong here as the Russell Crowe of Spanish cinema, graduating from smoothly suited cop to sweaty, muscular disabled basketball player in a wheelchair.

Meanwhile, his apparent nemesis is a young man who has served time for the shooting that crippled him and is now out of prison and settling old scores, which involves romancing two strategically selected married women. It's sexual melodrama in the style of James M. Cain.

See No Evil: The Story of the Moors Murders (2006). Fact-based film about Ian Brady and Myra Hinkley. Both were responsible for the rape, torture, and murder of five children aged 10-16 in northern England, the bodies of their victims buried on the moors.

Sean Harris and Maxine Peake play the psychopathic killers, and the story of the film focuses on the efforts over two years during the 1960s to identify and track them down. Living testament to the banality of evil, they were eventually turned in by Hindley’s brother-in-law. The film leaves depictions of their atrocities to the imagination, but it’s still bloody chilling. Director, Christopher Menaul.

All are available at netflix.