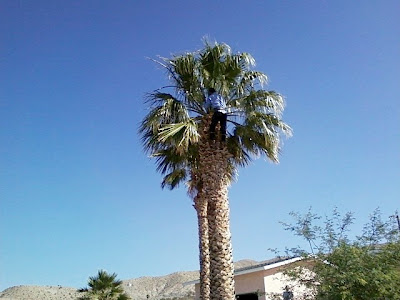 On a walk in the neighborhood one morning this week, the dog and I found this fellow up a palm tree and giving it a trim. A palm tree expert would probably call this a bad example of pruning, since the guy has climbed up like it's a utility pole, and the shoe spikes cause permanent damage. Ideally you want this done with a crane. He's also removing too many of the healthy fronds.

If I can believe my limited research on this topic, the number of healthy fronds on a tree is supposed to be the optimal number needed for that tree's growth. Dead fronds are dead because they are no longer needed by the tree for photosynthesis. You trim those because they can harbor pests like rats and pigeons. They're also a hazard for folks on the ground when they fall.

The practice here, probably for economic reasons, is to trim palms back to just a few fronds at the top, referred to as a "rooster tail." This may save the cost of more frequent trims, but it can apparently jeopardize the health and viability of the tree. I'm wondering if my neighbor, who was standing in his front yard watching, had done his research before hiring someone to do the job.

Week in review. Been a week of bacheloring, while my wife and partner paid a visit to family and friends back East. The bad weather in the Midwest delayed her return by 24 hours, but she got home safe and sound (and very tired) yesterday evening.

I was pretty much housebound, with an aging and ailing miniature pinscher who has developed a severe case of separation anxiety. So I read, blogged, and watched westerns, plus starting into the complete Deadwood series. Watching those episodes and then rewatching them with the commentaries has been an unexpected pleasure.

A colleague at work has been talking up this series ever since it was new, and I was too much into the cowboy West to get excited about the carry-on in a mining town. I'd also seen a sample of the series and found the profanity off-putting because it seemed too modern and anachronistic. As others have said, after an episode or two, you stop noticing that.

Having now read early-early western fiction set in mining towns or about miners, I see mining as part of the frontier experience. And I have to thank Walker Martin for encouraging me to expand my vision of the Old West and to give this material a try. Deadwood will now rank with Lonesome Dove for me as the best of the made-for-TV westerns.

Coming up. Those of us who joined David Cranmer reading King Solomon's Mines will finish up this week, and I plan to post a review on Thursday. I invite everyone else to chip in here then. A few issues have come up already, and I'm really curious to find out folks' final opinions.

When Blogger started acting up, I found that it helps to check over at downrightnow. You can see how it's been up and down over the past 24 hours, and there are links to blogs, facebook, and twitter for current info.

During the coming week, god willing and the crick don't rise, I'll be posting reviews of westerns and one or two early-early western novels. Richard Wheeler's new Axel Brand mystery is up at amazon now to pre-order. I was able to read an advance copy of that and will have a review here tomorrow. And so life goes on. . .
Posted by Ron Scheer at 7:53 AM