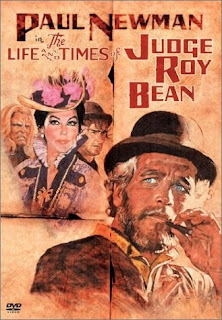 This movie was made in that quirky window of time in Hollywood between Easy Rider (1969) and Jaws (1975). It wants to trade on the success of Butch Cassidy and the Sundance Kid (1969) by putting Paul Newman in the starring role and looking for humor in the escapades of an actual historical figure from the Old West.

The humor is actually broad satire, and a post-Vietnam cynicism creeps into its revisionist portrayal of frontier justice. It has the feel of something that might have worked well on the stage, but there’s not enough of what might have made it work on film.
I ordered this up from netflix because I’m currently reading Loren Estleman’s historical novel Roy and Lillie. Estelman likewise uses humor to tell the story of Judge Roy Bean’s infatuation with the English actress Lillie Langtry. And it works a whole lot better, partly because it is as much about her as it is about him.
The main problem with the film is that it doesn’t tell a story. Newman reprises his portrayal of Butch Cassidy, now grumpier and more quixotic, but the film has no plot. It’s mostly a series of barely connected episodes, each with a different cameo performance by one of the many folks who were part of this project.
Anthony Perkins plays a strange (well, didn’t his Norman Bates already define the term?) sort of frontier prophet, quoting the Bible. Tab Hunter gets a brief scene in which he’s hanged for shooting a Chinaman, arguing in his own defense that it’s not against the law in Texas. (According to one source, this is the opposite of what really happened. It was apparently Roy who set the prisoner free – on the same grounds.)
Stacy Keach nearly walks off with the whole movie in a wildly farcical scene as Bad Bob, a longhaired, albino outlaw. John Huston (who directed, and should have known better) is barely recognizable in a walk-on as Grizzly Adams. Roddy McDowell is a tight-assed lawyer in a stiff collar. There are more.
Animal rights folks surely blanch at the use of a large beer-swilling bear who shares several scenes with Newman. And if you fast-forward through B. J. Thomas singing “Raindrops Keep Falling on My Head” in Butch Cassidy, you’ll want to do the same when Andy Williams starts a saccharine tune of his own on the soundtrack.
The details of the Roy Bean legend are there. Roy’s saloon looks much like it does in old photographs. Roy administers justice from a thick copy of legal statutes. Fines levied on parties found guilty usually equal whatever money they happen to have on them. And the walls are covered with posters and photographs of the woman he idolized, Lillie Langtry, whom he maintains a correspondence with but never meets.
The  movie has Roy in a long, loving common-law relationship with a pretty Mexican girl played by Victoria Principal (later a featured cast member of TV’s Dallas). She dies giving birth to a child who grows up to be Jacqueline Bisset in the film’s last reel. In life, Roy had a tempestuous marriage to a woman with whom he fathered four children before the two separated.
One of the few highlights of the film is the stunning entrance of Ava Gardner as Lillie in the last scene. She floats gracefully around the saloon, named after her, which has now become a museum in Roy’s memory. The visitation of a movie goddess from the days when Hollywood was flush with them is a reminder of what westerns once were.
When the Coen Brothers released their True Grit earlier this year, they included The Life and Times of Judge Roy Bean as one of their five favorite westerns. Well, you probably know the Coen Brothers as well as I do. It’s not on my list. The whole project is one that should have been left to the history books.
The Life and Times of Judge Roy Bean is currently available at amazon

and netflix.
Photo credits: Wikimedia Commons
Coming up: Jackson Gregory, Under Handicap (1914).
Posted by Ron Scheer at 6:52 AM