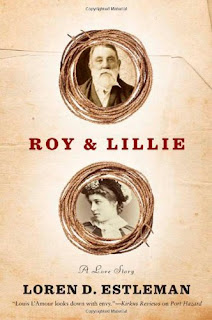 Staggeringly prolific Loren D. Estleman has written a well-researched and thoroughly entertaining life of two Victorian-era luminaries, Judge Roy Bean and Lillie Langtry. As a luminary, Lillie was famous for being famous. Her story is a corrective for anyone who thinks media-driven global celebrity is a recent development.

Remembered as an actress of the London stage, she was more talented as the performer of her own life story. She rose from humble beginnings as a minister’s daughter on one of the Channel Islands to become a favorite of the Prince of Wales, long before stepping before the footlights.

Ripples of her sudden ascendance among the rich and titled as well as the general public reached thousands of miles to West Texas, where she captivated the heart of one Roy Bean. As a luminary, Bean’s fame radiated from a saloon in the middle of nowhere, where he presided as a self-styled judge for many years as “the law west of the Pecos.” A man with a checkered past, he thrived out there on the frontier because he’d been unable to thrive anywhere else. For one thing, wherever he had lived, the law was usually after him.

Familiar with the wrong side of the law, he was probably best suited for the place and times to administer justice. Remembered for his quirky decisions, based on skewed readings of his Book of Statutes (for which he had no training whatsoever), Roy Bean was no Solomon. But he brought a wisdom of his own to the profession. If a man were hanged for a crime he didn’t commit, there was probably a crime somewhere he deserved hanging for. It was that kind of justice Bean had a talent for.

The full title of Estleman’s book is Roy & Lillie: A Love Story. It’s true that Roy was apparently infatuated with Lillie Langtry, while to her he could have been only one of a multitude who sent admiring letters. No correspondence between them exists today, but something there was in the man’s devotion to her that rang a chord for her.

When after many years she agreed on a cross-country tour to make a brief stopover to meet him, it was not simply as a courtesy call. Though she knew royalty and was a friend of Oscar Wilde among many others, he’d come to mean something to her. That he died only months before her arrival lifts their whimsical “love affair” to the level of high romance.

Estleman’s rendering of their stories is brilliant. The underlying subtext of the book is a melancholy awareness that life is never more than a veil of uncertainty. Yet from beginning to end, he writes with a light touch. On page after page he reveals that the love in this “love story” is first of all the love each of the two feels for himself. Yet his picture of both of them is so indulgent and forgiving, you don’t begin to like them any the less.


Most amazing is Estleman’s ability to marshal so much factual information about both people into a story that never stops being entertaining. Part of the success is alternating chapters between the two protagonists. This helps especially as Roy’s life once he reaches West Texas is plotless – just one damn thing after another. Lillie’s, by contrast, is an adventure full of perils as she uses her fame to rise ever higher in popular esteem despite pitfalls, obstacles, gossip, and the ill will of social equals.

Another key part of Estleman’s achievement is the wit, irony, and wry humor with which he tells his story. That’s a hard combination to keep working from start to finish. But for me it never fell flat. Hard to imagine a writer sustaining such a fragile balance throughout a novel  – and a historical novel at that – but he does it.

The final chapter was a nice surprise, for Estleman speaks in his own voice here, talking of how the novel was written, acknowledging historians who have preceded him. He comments that it’s been necessary for him to paper over the missing pieces of the story, composing for instance some of their letters. And he speculates himself on some of the unanswered questions about Roy and Lillie and their relationship.

Outside of an acknowledgement at the beginning, I’ve not seen this done before in a historical novel. It was a little like listening to a film director’s commentary on a DVD. Having him emerge as himself from the imaginative world just conjured by his words marked another kind of acknowledgement. It spoke of the affection he continued to feel for his subject and of the part we played as readers. I really liked that.

, AbeBooks, Powell’s Books, BookCloseouts, and for the nook.