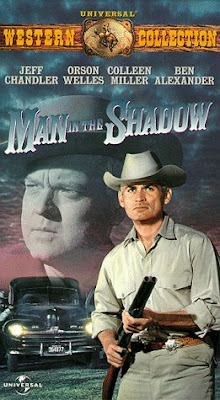 This noir western is the work of director Jack Arnold, best known for genre classics like Creature From the Black Lagoon and It Came From Outer Space. He was also a prolific TV director and producer with credits for scores of series ranging from “Mr. Lucky” to “Gilligan’s Island.”

His bio reveals another side of him, including internship with pioneer documentary filmmaker Robert Flaherty, the Peter Sellers satiric comedy The Mouse That Roared, and this film of murder and bigotry set in the modern-day West (a wall calendar sets it specifically in August of 1956).

It’s a black-and-white Cinemascope production (though netflix is sadly running only a pan-and-scan version). According to imdb.com, it was shot in large part on location in the Conejo Valley, west of Los Angeles. In many ways, it resembles Bad Day at Black Rock (1955), as one man stands up alone against a community turning a blind eye to the killing of a young “bracero.”

Jeff Chandler plays Sheriff Ben Sadler, the man of conscience and a fearless advocate of the rule of law. With his good looks and deep voice, Chandler was one of the few actors who could credibly play both a town sheriff and an Indian chief (Broken Arrow). (And while we’re at it, we may as well throw in his comic role as Philip Boynton, the heartthrob of  “Our Miss Brooks” on radio.)

Not altogether sure of himself, as we can tell from his body language, Sadler confronts the toughest customer in the community, a rancher named Renchler. That role is played wonderfully by Orson Welles, with all the assurance of a man long accustomed to ruling his giant spread by something like divine right. Meanwhile, the ranch foreman (John Larch) is up to his own dirty deeds, while putting the pressure on Renchler’s daughter (Colleen Miller) with some heavy-duty amorous advances.

The town fathers, the coroner, Sadler’s deputy (Ben Alexander), even his wife attempt to dissuade him from pressing his investigation. Renchler is too rich and powerful. Besides, the victims (two now and counting) are just “drifters” who may not even be legal immigrants.

Angered by the town’s unwillingness to pursue justice, no matter what, Sandler turns in his badge and goes after Renchler himself. The final confrontation at the ranch is played out at night in scenes that are straight from the dark heart of urban film noir.

At 80 minutes, the film wastes no time telling its story of crime and punishment, while making its points about how wealth and power corrupt ideals of social justice. Chandler is just fine. And Welles, of course, effortlessly commands every scene he’s in. I had not known of this film and was nicely surprised.

Man in the Shadow is currently available at amazon

and streamable at netflix.

Coming up: Everett Dick, The Sod-House Frontier
Posted by Ron Scheer at 6:24 AM