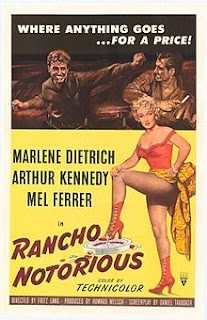 As much noir as western, this tale of “hate, murder, and revenge” is chiefly a vehicle for Marlene Dietrich. Director Fritz Lang keeps her looking glamorous and alluring, whether dressed in gowns or men’s clothes. She’s a femme fatale in an imagined West, offering bed and board for outlaws at her remote horse ranch in the desert Southwest.

Into their midst a man set on vengeance arrives (Arthur Kennedy). He’s looking for a robber who raped and killed the woman he was a week away from marrying. Neatly contrived, the plot offers opportunities for fistfights, gunplay, and jailbreaks. As bullets fly, the casualties mount.

For a western, there is also plenty of raw sexual subtext. Dietrich provides her share, often testing a man’s resolve by discouraging his advances. She first appears as a dancehall girl, riding the back of a cowboy across the floor of a saloon. Lazily singing a song with a cigarette hanging from her lips, she hauls off and wallops a patron who assumes she’s for the taking.

Later, romantically attached to a gambler, Frenchie Fairmont (Mel Ferrer), she invites a kiss from Kennedy before slapping his face. Eventually falling for him, she lets her usual tough talk slip and ruefully tells him to go away and “come back ten years ago.” Being a woman of compromised virtue, she has to pay her dues to the Production Code in the last reel. Though redeemed in part by her wish to leave her past behind, she has to take a bullet for one of the two men she loves.

All this steam is like an off-screen fog machine that sends a sultry cloud through the whole movie. Surrounding herself with rough men while enjoying their attention, Dietrich’s presence can be felt in scenes that don’t even include her. Jokes and banter among the men are thick with sexual innuendo. Meanwhile, dark passions find expression in the many shadowy after-dark scenes and an ominously stormy night sky.

Pulp and irony. For me, the film is much in the spirit of pulp fiction. The pulp aesthetic is there in the stripping down to the basics of action, violence, and sex. Instead of voice-over narration, the plot of the film is set up during the opening credits with several verses of a ballad, “Chuck-a-luck.” It’s a gambling game that’s eventually also revealed as the name of Dietrich’s ranch. At transitional moments during the film, and again at the end, we get to hear more verses of the song.

The pulp is leavened, however, with sly moments of irony. The film begins, for instance, with a big kiss in tight closeup between Kennedy and his fiancée, which is where the generic western usually ends. Then the film ends with a panoramic shot of mountainous desert terrain and a horseman riding in the middle distance – the kind of shot that westerns typically start with.

As another example, the obligatory fistfight takes place not in a saloon but a barbershop. And in his pursuit of the man who killed his fiancée, Kennedy fetches up in a town where candidates for reform are winning an election that will install a new local government. Inside the jail, he finds three crooked politicians in three-piece suits awaiting their fate.

The film was shot in Technicolor, with some location footage, the use of Republic Studio’s western town set, and a lot of scenes shot in the studio. This was one of three westerns directed by Lang, including The Return of Frank James (1940), reviewed here a while ago. The screenplay was by Daniel Taradash, better known for his From Here to Eternity (1953) and Picnic (1955).

Dietrich had been performing in movies from the heyday of the silents in the 1920s. Besides her iconic role as the cabaret singer in the German film Blue Angel (1930), she would be remembered for performances in Witness for the Prosecution (1957) and Judgment at Nuremberg (1961). Also appearing in the film are George Reeves, about to become best known for his TV role as Superman, and veteran character actor Jack Elam.