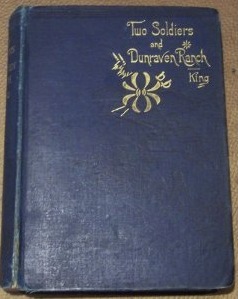 Charles King (1844-1933) was a captain in the U.S. Cavalry when he wrote this novel. A West Point graduate and career officer, King served most of his years as a fighting soldier during the height of the Indian Wars. Two Soldiers gets included in our ongoing survey of early-early westerns because it takes place in part during the Apache Wars on the Arizona frontier.

King has been faulted for his unsympathetic treatment of Indians. However, coming from a young officer in the years following the Little Big Horn, his opinions should not be surprising. In this novel, a band of renegade Apaches commits all manner of savageries, killing whites, pillaging, and kidnapping women and children. The novel’s hero, Cap. Fred Lane, leads a small number of troops that valiantly rescues the captives before the Apaches escape to Mexico.

Plot. This battle is actually only a small part of a novel that is mostly set back East in a large fictional city. It takes up the matter of a man’s reputation and how a cowardly, devious, and unprincipled man can still rise swiftly in the eyes of others.

That man in this novel is Gordon Noel, a dashingly handsome young officer whose looks and engaging manners charm everyone into thinking he’s a hero in the making. The gossip and rumor mill and the patronage of a colonel’s wife help him to vault over soldiers more worthy of promotion. The cousin of a Wall Street millionaire, he’s able to wield influence among the wealthy and powerful.

While he talks big, no one has seen him actually do anything that involves any risk taking. He’s managed to avoid engagement anywhere on the front lines, getting convenient reassignments far away from the action or arriving too late to take part. Fellow officers, being a league of gentlemen, never confront him in the matter.

Lane is one of these. Though he doesn’t miss much, he is distracted by having fallen head over heels in love for the first time in his life. The girl, Mabel, is a sweet young thing and the only daughter of a well-to-do family. When Lane leaves her to rejoin his regiment, Noel steps into his shoes and eventually makes off with the girl.

Noel’s downfall finally comes in that engagement with the Apaches. He and his troops have been ordered to rush to Lane’s support, but he drags his feet, losing crucial hours. Then he pulls back when shots from a handful of Indians put him in fear of an ambush. Eventually, the truth of his cowardice comes out, but not before he has again claimed to be the hero of the hour.

Structure. The story is well told and expertly plotted. King builds suspense and keeps intensifying the conflict between the two men. He includes letters, dispatches, and news clippings to advance the action. A subplot involving a deserter adds an element of mystery.

Best of all is his portrayal of the social discourse on an Army post. We overhear enough conversations among the officers’ wives to be convinced that they’re the real originators and shapers of received opinion. Careers depend on their likes, dislikes, and resulting judgments.

Values. King is obviously an advocate of this world, and in the novel he comes to its defense. He notes that the families of wealthy industrialists and financiers regard soldiers as beneath them socially. He finds that old school chums who have prospered now look down on him for taking meager Army pay instead of seizing opportunities offering greater financial rewards.

In that respect, the soldier is similar to the cowboy of western fiction. They each choose the fraternity of other men, where there are well-defined standards of behavior. Both have occupations that take them far from the city and make use of horses and firearms. Both answer a calling that requires courage and other manly attributes, with little offered in the way of material gain.


Is it a western? Yes, but only marginally. Only a small, though important, part of it takes place in the West. Set in the 1880s, it concerns characters whose lives were directly affected by events on the frontier, and King writes from first-hand experience of those events.

It’s a West with cowboys and ranches, but they are chiefly part of the ambiance around the reality of the military post. We meet no civilians on the frontier and learn little if anything about them. In the matter of landscape or location, King describes no more than he has to.

Wrapping up. King is a gifted storyteller of the Gilded Age. Reading Two Soldiers, it’s important to remember that the literary West was represented at the time chiefly in dime novels. It would be a full twelve years before Wister’s The Virginian (1902). Given King’s focus on social life as found in the military, he seems not to have the idea of a “western” in mind at all. But given the western location and the concern with character, the novel makes an interesting bridge to it.

Of his 40-50 novels over a 25-year period, more than half have western themes. A handful was made into films in the mid 1920s. King also wrote and appeared in a film, The Indian Wars in 1914. Two Soldiers can be found free online at google books.