These are from a novel about a homesteader in South Dakota, a cowboy elected to the state legislature in Colorado, and U.S. cavalry officers during the Indian Wars. Once again I struck out on a few. If anybody knows the meaning of “hop-room,” “dopster,” “Maudism,” or “squeegee,” leave a comment.

Back of Beyond = any real or imagined remote region; first put into print by Sir Walter Scott in his novel The Antiquary, 1816. “How absurd you are! Who ever dreamed of such a thing? This isn’t the Back of Beyond.” John H. Whitson, Justin Wingate, Ranchman.

charivari = a  noisy mock serenade, typically performed by a group of people in celebration of a marriage (also spelled “shivaree”). “The next night about sixty of the white neighbors gave us a charivari and my wife was much pleased to know there was no color prejudice among them.” Oscar Micheaux, The Conquest.

come to taw = to meet a requirement or expectation. “In some way he or his partner, Clark, came to taw with additional funds.” Charles King, Two Soldiers.

curtain lecture = a scolding or rebuke given in private, especially by a wife to her husband. [Illustration above from Mrs. Caudle's Curtain Lectures by Douglas William Gerrold in Punch, 1846, with illustrations by Charles Keene.] “She seemed to me to be more forward than ever that morning, and I felt a suspicion that I was going to get a curtain lecture.” Oscar Micheaux, The Conquest.

David Harum = fictional character in a popular novel of the same name, published 1898, about a sharply devious horse trader. “It was with many misgivings that I called out in a loud, breezy voice and David Harum manner; ‘Hello, Governor, how will you trade mules?’” Oscar Micheaux, The Conquest.

dog-cart = A one-horse carriage, two- or four-wheeled and high, with two transverse seats set back to back. “As they thus talked and loitered, Ben Davison came driving by in his dog-cart, with Clem Arkwright.” John H. Whitson, Justin Wingate, Ranchman.

haversack = a backpack for carrying a soldier’s rations and personal items. “One of the men had a led horse, completely equipped for the field, with blankets, saddle-bags, carbine, canteen, and haversack.” Charles King, Two Soldiers.

indignation meeting = a meeting held for the purpose of expressing and discussing grievances. “An indignation meeting was held, where with much feeling they denounced the actions of Ernest Nicholson in buying land north of the town.” Oscar Micheaux, The Conquest.

led horse = a packhorse or spare horse. “Three troopers with a led horse—all four steeds panting from their half-mile race—reined up in front of the eastern portico in the full glare of the lights.” Charles King, Dunraven Ranch.

let/shake a reef out = to enlarge (reference to adjusting the amount of sail exposed to the wind). “If you do anything like that again I’ll have to let a reef out of the band of my trousers.” John H. Whitson, Justin Wingate, Ranchman.

luck cage = an hourglass-shaped cage containing three dice, used in the gambling game chuck a luck. “In tents, back rooms and overhead could be heard the b-r-r-r-r of the little ivory marble as it spun a circuit over the roulette wheel, and the luck cages, where the idle sports turned them over for their own amusement, to pass away the time.” Oscar Micheaux, The Conquest.

mountain fever = an acute viral infection spread by the bite of the Dermacentor andersoni wood tick; Colorado tick fever. “I want you to go right to your quarters and stay there, Lane, for you’ve got a fever, and, I believe, mountain fever.” Charles King, Two Soldiers.

Mr. Toots = a character in Charles Dickens’ Dombey and Son. “Like Mr. Toots, poor Lane, in his anxiety to put no one to any trouble, came within an ace of stammering, ‘It’s of no consequence’.” Charles King, Two Soldiers.

Parthian arrow = an arrow discharged at an enemy when retreating from him; hence, a parting shot. “She shut those lips firmly, rigorously denying herself the feminine luxury of the last word and the launching of a Parthian arrow that would have made, indeed, a telling shot.” Charles King, Two Soldiers.

pongee = a soft thin cloth woven from Chinese or Indian raw silk or an imitation thereof. “The men strolled in to luncheon in shirts of lightest flannel or pongee.” Charles King, Two Soldiers. 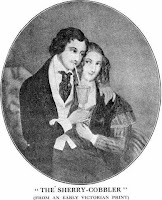 racket store = a five- and ten-cent store. “What amused me most however, was an article written especially for one of the Megory papers by a keeper of a racket store and a known shouter for the town.” Oscar Micheaux, The Conquest.

sherry cobbler = a popular drink in the nineteenth century made of sherry, sugar, and lemon or orange wedges served over ice. “Noel laughingly ordered a sherry-cobbler, saying the day was far too hot for anything stronger.” Charles King, Two Soldiers.

Sir Oracle = a dogmatical person; one not to be contradicted (from Shakespeare, Merchant of Venice). “He was no Sir Oracle, and had never pretended to be, and he began to doubt himself and his conclusions.” John H. Whitson, Justin Wingate, Ranchman.

stern chase = a chase in which the pursuing vessel follows directly in the wake of the vessel pursued. “At first all is one mad rush until it is certain that the rabbit is a veteran who understands well the maxim that ‘a stern-chase is a long chase’ all over the world.” Charles King, Dunraven Ranch.

tarnal = damned (used as an intensifer; cf. tarnation). “I understand too tarnal well. If I had my way I’d kick his ornery carcass out of this house.” John H. Whitson, Justin Wingate, Ranchman.

upas = a tree of southeast Asia known for its poisonous sap. “Sybil’s malevolent influence seemed to lie over everything that came near her, like the blight of the fabled upas.” John H. Whitson, Justin Wingate, Ranchman.

vomito = The yellow fever in its worst form, when it is usually attended with black vomit. “The consul at Vera Cruz had written to Mr. Withers full particulars of his cousin’s death,—one of the first victims of the vómito,—and had sent these papers with the formal certificates of the Mexican officials.” Charles King, Two Soldiers.