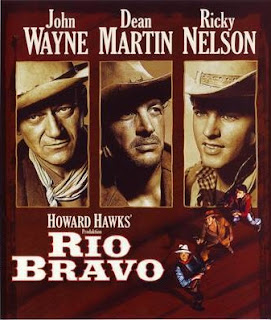 I probably saw this film in 1959, the year I graduated from high school, but I don’t have a memory of it. And I’ve put off seeing it now because I wasn’t sure I’d like either Dean Martin or Ricky Nelson. Turns out, they are both good, and Wayne is easily the best I’ve ever seen him.

Cast. Could be that the director was Howard Hawks, who  directed the classic western, Red River, also with John Wayne. He gets a relaxed performance from Wayne that has him doing what he always does best, reflecting a wry sense of humor. But if you grew up with Dean Martin opposite Jerry Lewis and then with his own variety show on TV, you think of him as belonging in a high-class Italian suit, holding a highball and a cigarette. A cowboy hat? No. 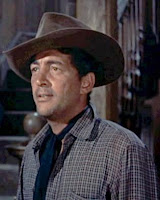 But the big surprise was the credible job he does as a former deputy on the comeback from two years of finding oblivion at the bottom of a bottle. Ricky Nelson is surprisingly stiff, given the fact that he grew up in front of cameras. But Hawks gets it to work for him, by not giving him much to do or say. The movie gets a little self-conscious when it has singers Martin and Nelson sing a duet, but with the help of Walter Brennan, it recovers itself again.

Brennan is at his comic best in the film, almost a self parody. He gets plenty of lines and though he almost never leaves the jail, where he’s keeping an eye on a prisoner, he has enough action as well. Angie Dickenson is given more than the usual two-dimensional part as the token female in the cast. The scenes of teasing flirtation between her and Wayne are plausible and seem to suit both of them. 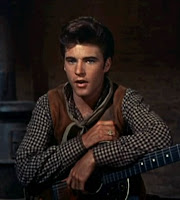 Plot. The plot is pretty simple for a film that runs 2 hours and 20 minutes. In a wordless opening scene, Claude Aikens shoots a man in a saloon and is arrested by Sheriff Wayne. With a town full of Aikens’ friends and a wealthy rancher for a brother, an attempt to spring him from jail is highly likely.

Wayne has only himself, game-legged deputy Brennan, and the still drying-out deputy Martin to prevent that from happening. And it’s a 6-day wait until a U.S. marshal arrives to take away the prisoner. Ricky Nelson, as the “Colorado Kid,” joins them. And the four men manage to hang onto the prisoner while being greatly outnumbered. 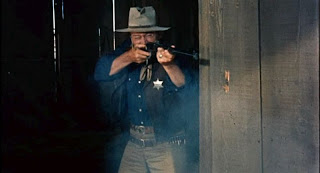 Shot in widescreen and color, the film includes a big cast of characters. A regular actor in Wayne’s company, Pedro Gonzalez-Gonzalez plays the town hotel owner. With his thick Mexican accent and his diminutive size, he is a warmly comic presence in the film. Ward Bond also appears in a role that is surprising for its brevity.

Jules Furthman and Leigh Brackett were the film's screenwriters. Furthman had a long writing career in Hollywood (1915-1959). Rio Bravo was his last film. Said to take place in west Texas, it was shot in Old Tucson, Arizona, and in Warner Brothers Studios, Burbank.

There’s an extensive list of interesting trivia related to the film at imdb.com. The most revealing is that the film was intended as a response to Gary Cooper’s High Noon, which Wayne is supposed to have considered “un-American.”

and streamable at both netflix and amazon