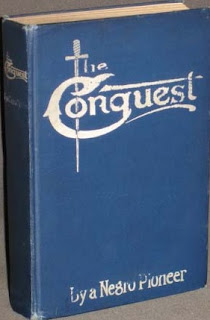 It’s not easy to pigeonhole Oscar Micheaux (1884-1951) as a western writer. On the other hand, it’s maybe too easy to classify him as one of a kind. His first novel, The Conquest, falls squarely in the genre of Great Plains pioneer fiction. The main character courageously goes West to become a homesteader and break sod on the open prairie of South Dakota.

His challenges are the vagaries of weather and overcoming the errors of learn-as-you-go farming. The far greater challenge for him, unlike his neighbors, is the color of his skin. He’s an African-American in Jim Crow America.

Being a black man means he has to go it alone. Not because any whites are holding him back, but because he can’t persuade other blacks to take advantage of the opportunities that western development offers. So Micheaux’ novel draws on the go-west themes of independence and building character on the frontier. But it’s also a polemic against the false values and lack of gumption that keep blacks from getting ahead.

Race. His grievances are dramatized in his great difficulty in finding a suitable marriage partner. The only women available in the surrounding community are white. Thus courting requires much letter writing and trips to Chicago and the rural black communities of southern Illinois.

After several attempted courtships that go nowhere, he has the misfortune to marry the daughter of a domineering minister. The Reverend instantly takes a dislike to Oscar’s progressive ideas and independence. Believing that Oscar is “rich,” the family grudgingly consents to a marriage.

A year later, after the stillbirth of their first child, she’s had enough of the frontier, and the Reverend has had enough of his son-in-law. He willfully comes between the two of them and wins away the girl’s affections. She returns to Chicago, never to return.

Homesteading. Interesting for the modern reader is Micheaux’ detailed account of transfers of government lands to homesteaders. He describes how tens of thousands descend on a frontier town to register for only a few thousand available quarter sections.

Tents sprout on vacant lots, with cots for up to 500. In others, notaries and pretty girls offer to help applicants prepare applications. Hotels install 3-4 beds to the room. Among the crowds are pickpockets, conmen, and "lewd women." Automobiles appear in large numbers. There’s gambling in the bars and pouring from them the sound of ragtime music.


We learn that a lottery is used to determine the few thousand who’ll be permitted to register, as well as the take-a-number order in which they can select their claims. Filing a claim requires an initial payment of $206 plus other fees.

All land goes for a flat rate of $6 per acre. Because of location, some plots can be worth far more than that. As many as half of claim filers may put up their claims for sale, hoping for a better price. After six months, those who’ve missed out on the first round have a chance to purchase one of these “relinquishments.”

During that same six months, those who intend to homestead their claim must improve it by building a place to live and actually living there. If they don’t, they lose the option to buy. Speculation and graft confound this already complex process.


Is it a western? Yes and no. A cowboy or two lurk on the open ranges to the West, where cattlemen have raised cattle for a couple of decades. Vigilantes appear briefly in one chapter as an isolated community goes after the rustlers who’ve been running off cattle and horses.

A posse descends on a “rancho notorious” on the banks of the Missouri River, where thieves have found a welcome for many years. Three die in this incident, one of them the rancher, and two are members of the posse. And that’s about it for gunplay.

The novel is chiefly about the farming communities that spring up as the frontier moves westward across southern South Dakota. To call this a western, you’d have to make a strong argument for its western location and the grit of its main character. He works as hard as any cowboy hero to preserve and exercise his independence. The only obstacle he doesn’t overcome is the one man who qualifies as the novel’s villain – the Reverend.


Wrapping up. The Conquest: The Story of a Negro Pioneer is generally understood to be autobiographical. It closely follows the life of Micheaux himself, who grew up in a large family in southern Illinois and left home as a teenager. After his homesteading experiment in South Dakota, he took to writing novels, which he reportedly sold door-to-door.

Then in an effort to turn his story into a film, he got into the movie business, with an independent production company in Chicago. From 1919 to 1948, he made over 40 films with black casts for black audiences. He is remembered today primarily for that achievement.

and for the Nook.

Image credits:
Photos from the first edition of The Conquest