Though crime is a common theme in early western fiction, sleuthing and crime solving rarely come into play. Likewise, we rarely get a look into the criminal mind. A story’s focus is almost always on the hero, not the villain.

There are a few interesting exceptions. For examples, let’s look at three novels: Stewart Edward White’s The Westerners (1901), Frank H. Spearman’s Whispering Smith (1906), and Francis Lynde’s The Taming of Red Butte Western (1910). Each has a slant on crime that’s worth a closer look.

Sociopath. The Westerners would rank as western noir if such a thing existed 110 years ago. The setting is the Dakota Territory of the Old West, and the story takes place mostly in a mining camp called Copper Creek in the Black Hills. The central character is a half-breed by the name of Lafond, who has a hate on for a white man, Billy Knapp, that goes back many years. 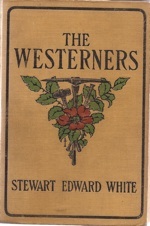 For a time, we learn that Lafond “went native,” joining a hostile band of Sioux and taking part in the Battle of Little Bighorn. Returning to the white man’s world, he becomes a successful entrepreneur. He builds a saloon and dancehall franchise, setting up wherever there are mining camps.

He finds Knapp, now a prospector in Copper Creek, and hatches a scheme to take ownership of his mine. Meanwhile, he is busily corrupting the morals of a young white girl, Molly. She believes Lafond is her father. She doesn’t know that he not only kidnapped her as a toddler but killed and scalped her real mother in an Indian raid.

Lafond is drawn as a chilling portrait of a sociopath. His villainy, however, is laid to his mixed blood. He has inherited the worst traits of both races. He meets his end when he is captured by the Sioux tribe he deserted years before. They hold a tribunal during which he is found guilty of a crime he didn’t actually commit. And he is tortured to death.

For the reader, a walk in Lafond’s shoes is a vicarious stroll on the wild side. So far, I have not come across another character study like this one in the early western. Villains do villainous things, but there’s not much curiosity about the criminal mind itself.

Detectives. The word “detective” in the Old West would have meant men like those of the Pinkerton Agency, hired by railroads and big business to protect their assets. Charles Siringo (1855-1928) and Tom Horn (1860-1903) were Pinkerton agents, infiltrating gangs of rustlers and train robbers and helping to bust unions. Horn also hired out privately to cattlemen’s associations to eliminate cattle thieves without due process. 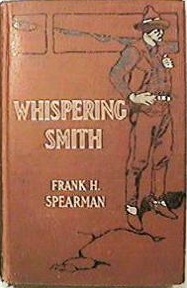 For a fictional detective, early westerns offer us Frank H. Spearman’s Whispering Smith. Smith is a railroad detective working the Rocky Mountain lines of Wyoming. He hunts down and brings in any outlaws cutting into the company’s profits. These include train robbers and anyone disrupting business or willfully damaging company property. If they resist arrest, he has license to kill.

Because he is lightning fast with a gun, he has a reputation that gives your average lawbreaker an instant case of fear and trembling. He’s also in possession of superior intelligence and razor sharp judgment. Add to that his generous and winning ways with both friends and the ladies, and you have a thoroughly likable hero.

Whispering Smith is a wonderfully complex creation. He got his nickname as a boy, when bouts of laryngitis reduced his voice to a whisper. But it suits him as a man with a dangerous job who brings an enviably deft touch to whatever he does.

While apparently fearless, he knows he has enemies and is aware that his life may be cut short at any moment. Spearman hints that he is a lonely man whose chief compensation is knowing that he does his work well. Meanwhile, he is conscious of its moral ambiguity. He is, after all, a hired gunman, serving the interests of a railway tycoon.

Mystery. There’s little in the way of actual mystery in Whispering Smith. We take a step closer in that direction with Francis Lynde’s The Taming of Red Butte Western, another railroad novel, where there is mystery aplenty. 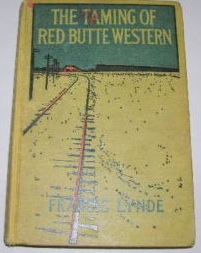 With its main line traversing the desert Southwest, Red Butte Western is the victim of sabotage and there’s only circumstantial evidence pointing to the perpetrators. Trying to enforce reforms to stop them, the central character Lidgerwood earns the ill will of many of the employees. He is shot at by a gunman whose brother he has fired for dereliction of duty. Then he begins uncovering fishy details about a building and loan scheme that has left disgruntled investors empty-handed. All of this is just a sample.

Lynde is adept at building suspense and maintaining it over several chapters at a time. The final 24 hours of the story tick by, with one eye on the clock, as a violent strike brews and then explodes around the characters.

Meanwhile, Lidgerwood’s life is complicated by the unexpected arrival of a former girlfriend and several of her male and female companions. Unconvinced of any danger to themselves, the visitors refuse to leave as the strike builds. Lidgerwood must look after their welfare as well as keep the railroad running.

Uncertain of whom to trust, he has his suspicions, which settle on one of his subordinates. The resolution of everything, as the real culprits are revealed, is not short of breathtaking. And the novel ends with a bang.

Crime, of course, never pays in the Old West, but while crime is endemic in early western fiction, writers found their own ways to incorporate it. We have to wait a while yet for W. C. Tuttle’s stories of frontier crime detection. By then, the western has developed distinctive forms of its own.