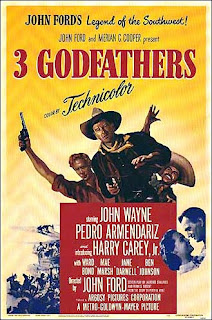 The way this film was transformed in its journey from the printed page to the screen has director John Ford written all over it. Peter B. Kyne’s novel (reviewed here earlier) was published in 1913. Ford directed the first film adaptation of the novel in 1916, with Harry Carey. When Carey died in 1947, Ford decided to remake the story in Technicolor and dedicate the film to his memory.

Other film and TV versions have appeared under different titles over the years, before and since. Seems likely it has to be there somewhere in the background of the Tom Selleck comedy 3 Men and a Baby (1987).

Plot. The Three Godfathers was already a kind of Christmas story in Kyne’s hands. Not exactly the three wise men, the central characters are on the run following a failed bank job. But crossing the desert, they come upon a pregnant woman in the final hours before giving birth.

The new mother dies, after leaving her infant son to the care of the three men, who promise to be his godfathers and to bring him up right. With a dwindling supply of water, they start on a trek to a mining camp called New Jerusalem (New Bethlehem being maybe too obvious). Only one of them eventually arrives with the baby. It is Christmas, and so ends Kyne's novel.

Ford’s version. The biggest change in the plot was to make John Wayne’s character the sole survivor of the three. In Kyne’s telling of the story, the youngest of them makes the final leg of the journey alone. Instead, the film makes this character (Harry Carey, Jr.) the first fatality. During the bank robbery that starts the film, he sustains a gunshot wound that’s eventually the cause of his demise.

Another change was to make one of the men Mexican (Pedro Armendáriz). He lapses into Spanish at times, which gets Wayne telling him to stop speaking “Mex” in front of the baby.

Ford’s impulse to show characters as part of a larger community seems behind the decision to expand the cast with the addition of a subplot. Ward Bond as the town sheriff leads a large posse of men into the desert in pursuit of the robbers. Finally apprehended and then brought to trial in the town saloon, Wayne’s character demands to retain custody of the baby.

Found guilty of armed robbery, he’s given the lightest sentence by the judge, who’s been moved by the obvious character of a man who won’t renege on a promise to a dying woman. On the train that will take him to Yuma prison, Wayne waves his hat at the crowd assembled to see him off, one among them a pretty girl who clearly looks forward to his return.

Sentiment. Kyne doesn’t exactly hold back on the sentiment, but Ford gets the audience reaching for handkerchiefs. The Christian symbolism is amplified. A star guides the three men across the desert, and a life-size cross lies across the grave of the dead mother. The film even begins on a sober note, dedicating itself to the memory of the much-loved Harry Carey, Ford’s longtime associate.

Folk songs and hymns comprise the soundtrack. The mournful “Streets of Laredo” gets a workout. Harry Carey, Jr., sings at the burial of the baby’s mother. A church choir style chorus gathers on a train station platform to sing “Shall We Gather at the River?” Meanwhile, all this is leavened with moments of farcical comedy, Hank Worden’s struggles with reluctant pack mules and Jane Darwell’s raucous delight in playing hostess to a posse of men. It’s Americana Ford style.

Wrapping up. This was the first big role for Harry Carey, Jr. He would have a long career in Hollywood, with 161 film and TV credits between 1946 and 1997, including multiple appearances on Gunsmoke and Have Gun, Will Travel. Pedro Armenáriz was an international film star who spoke fluent English and Spanish. Playing to stereotype, he speaks accented English in the film.

Two other cast members deserving a mention are Mae Marsh as the sheriff’s wife and Ben Johnson as “Posse man #1.” A silent film star, Marsh appeared in 200 films from 1910 to 1964, frequently uncredited after 1936. Ben Johnson was at the beginning of his career, with only uncredited roles in ten previous films, all westerns, 1939-1948. This was the first time the name of this wrangler and stunt rider from Oklahoma appeared in the opening credits.

The film was shot in various locations around California, in the Alabama Hills near Lone Pine, Death Valley, and the Mojave Desert. It’s currently available at amazon

and netflix. Tuesday's Overlooked Movies is the bright idea of Todd Mason over at Sweet Freedom.