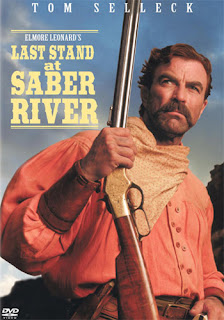 Based on an Elmore Leonard novel, this is a traditional western with some B-western elements thrown in for old-fashioned excitement. Tom Selleck gives his usual performance as a man weary with the stupidity and the violence of the world. Shot in New Mexico, with plenty of location and aerial photography, the film is handsome to look at.

Plot. The story is set in 1865, as the Civil War lurches toward its conclusion at Appomattox. Paul Cable (Selleck), a Confederate officer, returns to the family he left behind and to his ranch in Arizona. For Cable, the war is already over, and he just wants to get on with his life.

He finds a wife who for years has believed he was dead. Glad that he’s alive, she’s still angry about his going off to war, as Arizona Territory was not part of the Confederacy. Meanwhile, his neighbors (Keith and David Carradine) are hardly pleased to see him at all. They are Union sympathizers, making a living by rounding up wild horses for delivery to the Army. Only a trading post operator, who is running guns for the South, welcomes him back.

Cable sees war for what it is, a lot of bloodshed and killing. He has been much affected by witnessing a massacre of unarmed Union prisoners. And the killing doesn’t stop, even here, far from the battlefields. The body count by the end of the film must be about 25.

First he has to evict the men who have taken over his house. Then he has to stand his ground against his neighbors. One of them, a blue-eyed, blonde femme fatale puts the moves on him, and he manages to resist her charms as well.

The last third of the film features a considerable firefight, with Cable defending himself against about a half dozen men. More than once in the film his wife comes to his rescue with a double-barreled shotgun. She does it here again.

This is followed by another firefight, ending with a daring rescue. The trading post operator, now the film’s villain, has taken Cable’s daughter hostage and is racing toward the Mexican border with a wagonload of crates filled with rifles. Cable grabs the girl from the wagon moments before it goes over a high cliff and smashes to pieces. At last, the wars on all fronts are over and there is hope for peace in the valley, as Cable and his wife agree to forget the past and focus on the future. 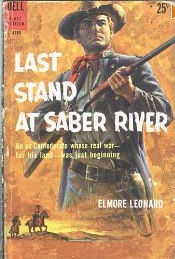 Elmore Leonard. I haven’t read the novel and don’t know that I’d recognize this story as originating with Leonard. In less capable hands, the film would come across as predictable and true to formula: a man defending himself, his family, and his right to live as he pleases on his own land.

Though Selleck turns in his usual performance, it’s one we enjoy watching. His physical presence on screen is always substantial, and his face reflects an intelligence and a persuasive depth of emotion. When he takes things hard, there’s no mistaking the pain in his eyes. We recognize him as a man who shoulders responsibilities and does his best to embody manly virtues.

The Leonard-like flourishes in the story come in the form of Cable’s tough wife (Suzy Amis). There’s a civil war in their marriage that always threatens to pull them apart. As long as he is a provider, she’ll stick with him, but never surrendering her own pride. In a long take at the end, they walk away together from the barn to the house, each supporting the other. Neither is diminished by their mutual dependence.

Keith Carradine’s character is also unexpected. He remains indifferent about Cable’s return as long as there is money to be made selling horses to the Union Army. Drawing a bead on Cable from ambush, he chooses not to fire, and we have only the ambivalent look on his face to explain his decision. He doesn’t become an adversary until he mistakenly believes that Cable has killed his father. When the blame eventually shifts to the trading post operator, he joins Cable in the rescue of his daughter.

Wrapping up. Historically, it should be said that there was in fact a good deal of Confederate sympathy in Arizona during the Civil War. The Union Army presence there was unwelcome. Residents in the settlements were especially isolated by the cutting off of trade and communications with Texas.

The film was made for TNT and won a Western Heritage Award for Feature Television Film. Selleck produced, and like his other projects there’s notable attention to period detail and to cinematography. The opening sequence of rounding up horses, with a stirring soundtrack, sets the movie off to a great start.

Last Stand at Saber River is available at netflix and amazon

. Tuesday's Overlooked Movies is a much appreciated enterprise of Todd Mason over at Sweet Freedom.