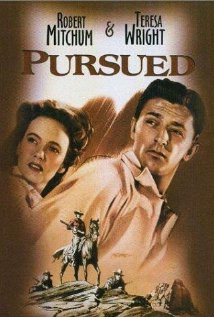 This noir western is a thorough mix of the two genres. James Wong Howe’s black and white cinematography makes much of contrast and shadows, while some scenes were shot on location near Gallup, New Mexico. We get images of riders racing along the foot of sheer bluffs in the same film with a bride pulling a gun on the groom on their wedding night.

Meanwhile, it’s an early starring role for Robert Mitchum, whose cool on-screen persona is already fully developed. Appearing along with him in major roles are Judith Anderson and Theresa Wright as mother and daughter. Wright, in fact, as the already established star (Shadow of a Doubt, The Best Years of Our Lives), gets top billing. Dean Jagger plays a villain so nasty he would hunt down and kill a ten-year-old boy.

Plot. Mitchum’s character is the sole survivor of a shootout between two families, the cause of which is not revealed until the last reel. He is raised by a widow with two other children, a brother and sister who are also his age. Growing up, the two boys never get along, while the girl falls in love with Mitchum.

In true noir fashion, prospects for everyone never look too good, and eventually everything heads south. The dispute between Mitchum and Wright’s brother (John Rodney) escalates into bloodshed—the brother’s. And plans for Mitchum and Wright’s wedding come to a dead halt.

When Wright is courted by another man (Harry Carey, Jr.), Jagger engineers a gun duel between him and Mitchum. This exchange of gunfire ends similarly. Mitchum now has taken the lives of two men, who’ve both had some attachment to Wright.

By now, we’re well into noir-land, as Wright agrees to marry Mitchum with a plan to murder him. When that doesn’t play out quite as intended, there are chases on horseback and more gunfire. Mitchum ends up with his head in a noose before an old score is settled and the mystery of the death of his family is finally explained. The moral of it all is clearly that it’s no good keeping family secrets.

Structure. This is a rare western film not based on a story or novel. Nevertheless, the original script, by Niven Busch, has the feel of a long work of fiction. Told in flashback, it begins with scenes from the boyhood of Mitchum’s character, Jeb, first at around six, then around ten.

Years pass and the grown-up Jeb goes off to fight in the Spanish-American War. He gets this honor after the flip of a coin releases Wright’s brother, Adam, from serving. More time passes, and Jeb returns. He leaves the ranch after a fistfight with Adam and goes into business with a gambling-hall owner in town. More time passes, and so on.

Loosely structured like this, it has a rambling feel that works against tension and suspense. Meanwhile, the flashback framing of the story means we know from the start that Mitchum’s and Wright’s characters will remain alive and well—and together at the end. (Through it all, we can also wonder at the oddest detail of the script, that the lovely Patricia Wright’s character has been named Thor.)

The pleasures to be taken in the film are often aesthetic ones. The cinematography, the performances, and the direction hold our interest when the story itself flags. For many viewers in post-war 1947, the downbeat mood of the film would also have a resonance.

Mitchum portrays well the emotional dislocation surely felt by a generation of returning soldiers, especially as he loses the ranch and the girl he plans to marry. His sense of lonely resignation is reflected in Mitchum’s unsmiling, almost sullen expression, always masking what seems to be hurt and confusion.

Credits. The film is in the competent hands of director Raoul Walsh, already known for High Sierra (1941). That film made dramatic use of a high-elevation chase and the on-screen magic of Humphrey Bogart and Ida Lupino. In 1949, he’d direct the James Cagney prison classic, White Heat.

Mitchum was 28 and at the beginning of his career in 1947. His few credits until then included roles in several Hopalong Cassidy pictures, including Bar 20 (1943), Colt Comrades (1943), and Hoppy Serves a Writ (1943). Mitchum has a strong on-screen presence even in these, especially when he’s playing an outlaw with two day’s growth of beard.

With Wright and Anderson getting a lot of screen time, Pursued is in some ways a “women’s picture.” Far more than the usual token roles in the generic western, their characters take actions that are key to the plot. Mostly unfamiliar with Mitchum, a 1940s audience would have seen the two leads as equals and the story as being about star-crossed lovers. Today, with Mitchum remembered as an action hero and Theresa Wright’s work mostly in TV from the 1950s on, Pursued falls instead into that curious subcategory called noir western.

Thanks goes to the UCLA Film & Television Archive for their restoration of this film. Pursued is currently available at netflix and amazon

Coming up: Frederic Remington illustrations
Posted by Ron Scheer at 8:02 AM