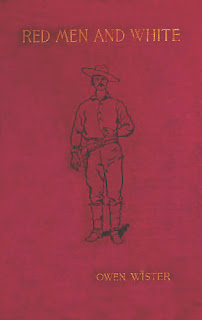 Republished in later years as Salvation Gap and Other Western Classics, this early collection of short fiction by Owen Wister was originally written in part for Harpers Monthly in 1894-1895. I first read it a half dozen years ago, and coming to it again after reading the work of his contemporaries, there’s more to notice that wasn’t obvious the first time.

Satire. What’s immediately striking in most of the stories is Wister’s wry irony and wit. Where western writers of the period like to hold forth on the superiority of the West to the East, Wister casts a jaundiced eye on what he finds there in the form of incompetence, stupidity, and naked self-interest.

Arizona comes in for the worst of it in a hilarious travel piece, “A Pilgrim on the Gila.” Witness to the robbery of $28,0000 in gold from an Army paymaster, the narrator is involved unwillingly in a trial that culminates in a quick acquittal from a fixed jury.

The experience leads him to condemn these “unthinking sons of the sagebrush” for perversion of their freedoms, and he declares them guilty of “independence gone drunk.” He can think of “no threat more evil to our democracy.” The frontier, he concludes, is the last place to look for “discipline, good order, and obedience.”

Cowboys and soldiers. The Virginian finds a cowboy as a model of true character, but you won’t find many cowboys here. Two crop up in “A Pilgrim on the Gila.” Their intent is unclear, and in his travels the narrator continues to cross paths with them. Finally they are among the dozen road agents who hold up the paymaster and make off with the strongbox.

Wister looks instead to the men in uniform who make up the U.S. Army on the frontier. Their patience and native intelligence are displayed in the story “Little Big Horn Medicine.” Here a handful of soldiers diplomatically deals with an Indian uprising. Under General Crook in “The General’s Bluff,” an outnumbered company of soldiers, in mid-winter and without firing a shot, rounds up a tribe that’s gone off the reservation.

In these stories, the Army is an institution for character building, as we see with an enlisted man, Specimen Jones. His freewheeling ways as a drifter and sometime prospector become more disciplined once he’s in uniform. In “The Second Missouri Compromise,” he gets sent to keep a dispute between lawmakers in the Boise Territorial legislature from escalating into violence.

Now a corporal, and still not too sure of himself, he is resolved simply “to stop trouble without making any.” Coming through the door just as guns are being drawn, he says, “Don’t nobody hurt anybody,” and he rescues the Governor and the Secretary-Treasurer from bloodshed—by arresting them.

Exposed to more than enough self-serving behavior among the citizens of the frontier, the narrator is relieved to arrive at an Army fort. Here he is grateful to find “American citizens with a love of their country and a standard of honor,” coming and going “in the simple dignity of duty.” He is moved by it all to say, “God bless our soldier people!”

Women and romance. In most of these stories, Wister keeps women on the margins of the narrative. His is a frontier world populated mostly by men. The women of a California town in “The Serenade at Siskiyou” are one exception. There, a group of ladies takes undue interest in lightening the hearts of two handsome young brothers being held for trial. They’ve been arrested for killing a man and shooting two others while attempting to rob a stagecoach.

In an excess of sympathy for the two prisoners, the women unintentionally jolt western-style justice into action. The men of the town happily lynch the two men without benefit of trial.

Two stories seem to be lessons in the dangers of falling too much in love. "Salvation Gap" is a mining camp melodrama, involving the murder of a woman by a betrayed lover and the hanging of another for the crime. "La Tinaja Bonita" is a long story in a similar vein, involving a man's long journey across an arid Arizona desert, driven by jealous love and ending in death. There isn’t a sign in these stories of the kind of woman who would materialize as Molly, the schoolmarm from Vermont in The Virginian.

White and nonwhite. For a collection of stories called Red Men and White, there are an appropriate number of Indians in them. You get the impression that Wister is trying to give them a balanced portrayal. An Army officer laments the “sentimentalists” behind wrong-headed policies from the War Department in Washington. And Wister seems careful not to get sentimental himself.

Writing not long after Wounded Knee, he never portrays the Army as part of what today can fairly be called a genocidal Indian policy. He focuses instead on the honorable men in uniform, and surely there were many. His stories reflect what seems to have been the received opinion at the time, that pacification and acculturation of the Indians were only a matter of time.

Wrapping up. Wister shows himself to be a good storyteller in these early pieces. While fascinated by the West, he does not romanticize it. He observes the excesses of unbridled independence there, while lamenting the absence of good sense and ethics everywhere, especially among politicians in Washington. Where he finds glimpses of character, they are mostly of men in uniform, and these will come together finally in the shining example of The Virginian some half dozen years later.

Coming up: More Owen Wister
Posted by Ron Scheer at 8:37 AM