These are from novels by Mary Austin and Roger Pocock, about a caballero in Old California and a cowboy who befriends an English lord ranching in Arizona. Once again I struck out on a few. If anybody knows the meaning of  “rim-fire cigar,” “baby troubles,” or “glue-glue harp,” leave a comment.

bear sign = doughnuts. “‘You’ll come with me first,’ says I, ‘for an oyster stew and some bear sign. I ain’t ate since sun-up.” Roger Pocock, Curly.

boss = a round, swelling, knob-like part or body (cf. emboss). “The trail went sidling on the flanks of the hills, and at each upward turn flung them a wider arc of boss and hollow.” Mary Austin, Isidro.

charro = Mexican cowboy. “So while they trotted slow Jim stained his hide all black like a greaser vaquero, then slung on the charro clothes of a poor Mexican cowboy.” Roger Pocock, Curly.

counter-jumper = a store clerk, a male shop assistant. “He was scared he would miss Jim, and get the counter-jumper who pranced around behind.” Roger Pocock, Curly.

deadfall = a trap with a weight that falls on the prey. “My house is like a deadfall trap. Indeed—ah, yes, only one door, you see.” Roger Pocock, Curly.

drawn thread work = a form of embroidery based on removing threads from a piece of fabric, the remaining threads grouped or bundled together into a variety of patterns. “She was the repository of all possible patterns and combinations for the drawn-thread work which occupied the leisure of that time.” Mary Austin, Isidro.

finikin = fussy, fastidious, precise in trifles, squeamish, picky. “He had all the high and formal breeding which runs with pure Castilian blood: the finikin hospitality and that exaggerated punctiliousness toward women.” Mary Austin, Isidro.

flirt = to fling. “When my boys found out that there was going to be trouble in town they surely flirted gravel for fear of arriving too late.” Roger Pocock, Curly.

forcemeat = finely ground and highly spiced meat, fish, or poultry that is served alone or used in stuffing. “It was a very comfortable meal,—soup with force-meat balls, chicken, beef dressed with peppers, a dish of spiced pumpkin, another of fried beans, fine flour cakes, and light sour wine of the Mission’s own making.” Mary Austin, Isidro.

give the office = to give a signal or hint. “Bryant gave me the office that some outlaws have come down from Utah.” Roger Pocock, Curly.

heliograph = solar telegraph that signals using Morse code flashes of sunlight reflected by a mirror. “The thing was a heliograph making talk, as it supposed, to the preacher, and Jim watched harder than ever.” Roger Pocock, Curly.

hurroar = cheer, hurrah, outcry. “It made me laugh to think what a big hurroar there would be presently when the news got wind of that train being held up by robbers.” Roger Pocock, Curly.

lashings = lots, an abundance. “Jim squatted down on the doorstep for a feed of pork and beans, with lashings of coffee.” Roger Pocock, Curly.

madroño = evergreen tree of the Pacific coast of North America having glossy leathery leaves and orange-red edible berries. “I come out at last in a cleared place under a madroño, and see something move on the grass which makes that cry.” Mary Austin, Isidro.

mahala = a slang word for an Indian woman in 1800's California, from a mispronunciation of the Spanish word  mujer. “Here are no wives, unless you have a fancy yourself for turning mahala, as seems likely.” Mary Austin, Isidro. [Thanks to www.native-languages.org]

mattock = a long-handled tool used for digging and chopping, similar to the pickaxe. “He tried the lock with his stone, tried the wood with his knife, fumbling and hurried; bethought himself at last to stumble about the dark and filthy corners of the room for a mattock.” Mary Austin, Isidro.

Maxim gun = the first self-powered machine gun, invented by the British inventor Sir Hiram Maxim in 1884. “Some of these savages are sure to be wanting a fight, so Mr. Britisher obliges, and comes along hot with rifles and Maxim guns.” Roger Pocock, Curly.

mosquito bar = a net to keep out mosquitoes. “Curly came tumbling through the mosquito bar in the window.” Roger Pocock, Curly.

open one’s budget = speak one’s mind. “Lebecque heard him, peering shrewdly from the shaggy pent of his brows, but made no offer to open his own budget until they had eaten and had two thirds of a bottle between them.” Mary Austin, Isidro.

palace car = Pullman railroad car. “Where’s your palace car? Have you sunk so low as to come in a mere cab?” Roger Pocock, Curly.

pie foundry = an eating place. “At the Delmonico pie foundry he let out that he craved for sausages, mashed potatoes, and green tea.” Roger Pocock, Curly.

put on side = to assume or take on pretentious airs. “Being thoroughbred stock, this British lord and his son didn’t need to put on side, or make themselves out to be better than common folks like me.” Roger Pocock, Curly.

roller = a thief, especially one whose victims are drugged, sleeping, or drunk. “There was the Alabama Kid, and beside him Shorty Broach, stage robber and thug, Beef Jones, the horse-thief, Gas, a tin-horn crook, Thimble-Rig Phipps, and two or three other sure-thing gamblers, rollers, and thugs.” Roger Pocock, Curly.

scrub = a worthless, contemptible, insignificant person. “All the scrubs and skin-game men were drifting into that corner behind him.” Roger Pocock, Curly.

sky scout = a parson. “He was dressed all in black, a sky-scout of sorts, but dusty and making signs as though he couldn’t shout for thirst.” Roger Pocock, Curly.

slant = to move off or toward. “With these remarks he slanted away back to town.” Roger Pocock, Curly.

stifle = on a horse, the joint at the junction of the hind leg and the body. “He was last seen on or about May 5th, at Clay Flat, in the Painted Desert, with a flea-bitten grey gelding branded x on the near stifle.” Roger Pocock, Curly. 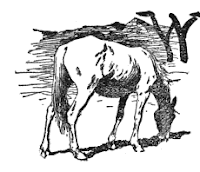 walk-a-heap = Indian term for a foot soldier. “The army is goin’ to come up agin’ us—pony soldiers, and walk-a-heaps, and twice guns, to take our water-holes.” Roger Pocock, Curly.

withe = a slender, flexible branch or twig, used for basket making. “Saco rolled stones across the mouth of it and made a little cross of withes.” Mary Austin, Isidro.