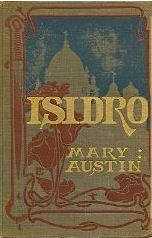 It’s not inaccurate or unfair to say that Mary Austin (1868-1934) was in her own zone. And in this novel of Old California, she is the master of it. Isidro is a tightly plotted novel that is both high-style romance and historical fiction. Among early-early westerns, it is one of a kind.

Plot. The story is set in the 1830s. The central character, Isidro, is a fey young Mexican of a well-to-do family who is about to enter the priesthood. On the way to that end, he is falsely arrested for a murder, rescues a kidnapped boy who turns out to be a girl, gets taken captive during an Indian uprising, and nearly dies in a forest fire. And that’s only half the story.

At novel’s end, Isidro is married to the girl, Jacinta, and has decided that the priesthood is not his vocation. The loving couple is on a boat headed for Mexico, where they live happily ever after. Like the ending of The Virginian, we get a flash-forward that tells us so.

Is it a western? While there are those who don’t consider California part of the West, I’ve never heard a good argument in support of this notion. Folks forget the state’s long history of ranching, cowboys, and vaqueros, its long connection with Hispanic culture, and the western terrain of mountains and deserts.

During her life, Austin made a study of Indians, and like other western writers of the period, she wants honestly to include them. Her Indians are not bloodthirsty savages but simple people. Some yield to the ordered life of the missions, where they are put to work by the fathers. Others prefer their own traditions and want the rights of any free human being.

It’s no cowboy western. There are pistols but little gunplay, until soldiers open fire on Indians near the end. The villains are few and not so bad once you get to know them. As a story of whites on a pristine and undeveloped frontier inhabited by Indians, it participates in the great stir of interest in the West by turn of the century writers. So, for now, let’s call it a western.

Contrasts. Austin has been claimed in recent years by feminists for her use of fiction to represent women’s issues. They are welcome to do so, if for no other reason than to draw attention to her as an accomplished novelist. Meanwhile, comparing her work to western fiction by male writers, you see their treatment of western themes in sharper relief.

The chief difference is the title character, Isidro, who is for much of the novel an innocent, an overgrown boy in a man’s body. Lacking ambitions of his own, he lets circumstances have their way with him. Trusting others, he takes everything at face value. Naturally, misfortune awaits him and he must learn from his mistakes.

His adventures awaken him to his true ambition in life, to simply be a man and no longer a boy. As a caballero, he is brave and fearless. But what needs to be awakened in him is his libido. He has to lose his innocence. He’s then able to discover his heart’s desire: to live simply for “life itself, for seeing, and feeling and stirring about among men.”

Villainy. Mascado, the half-breed, comes closest to being the villain of the novel. An escapee from the mission, he has a white father, identity unknown, and has been raised by a loving Indian mother. Rebellious by nature, he joins a band of renegade Indians who plan a raid on the mission’s cattle herds.

Libidinous, he determines that Jacinta is not the boy she pretends to be and kidnaps her. He is also responsible for getting the murder of a sheepherder pinned on Isidro so that he’s put in jail. His villainy weakens at the end as soldiers descend on the renegade camp. Wounded by gunfire, he helps Jacinta escape the raging forest fire that the troops have set, and he perishes in the flames.

Style. N.C. Wyeth should have illustrated this novel because his dreamy, heightened style hits the same notes as Austin’s romantic tale. Meanwhile, the coincidences and ironies and the mix of comedy and sentiment resemble the storytelling of O. Henry.

The novel spends only part of the time with its title character, Isidro. Point of view shifts at chapter breaks among a half dozen or more different characters. At times, the narrator confides information unknown to any of them or interjects an editorial comment. Austin also writes with the occasional cliffhanger chapter ending, leaving us in doubt for many pages about a character’s welfare.

Wrapping up. Isidro may intend to be an entertainment. But it is more than that. Its Old California is an actual place at a precise moment in history, with its own sobering realities. Seen in the context of early western fiction, it has something to say about Indian populations and the collision of cultures on a region of the frontier. And it provides a different spin on the hero’s getting of wisdom.

Isidro is currently available free online at Internet Archive. It is also available for the nook.