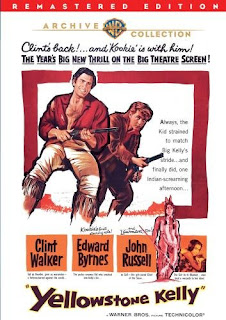 Clint Walker plays real-life Yellowstone Kelly in this colorful late-1950s western set in Montana. Novelist Heck Allen may have made a nod or two to history in his original story, but screenwriter Burt Kennedy has other ideas. His Kelly traps and hunts for sure, but is a confirmed loner. As this kind of story usually goes, he has to get over that.

Plot. Unlike the historical Kelly, this one declines to sign on as a scout for the U.S. Cavalry as they try to push the Sioux out of the territory. Not too willingly, he takes on a young protégée (Ed “Kookie” Byrnes), and they both get involved with an Arapaho maiden, Wahleeah, who’s been captured by the Sioux. Her immediate problem, however, is that she’s sustained a bullet wound and is about to die.

Like another Cavalry vs. Indians western I saw recently, They Rode West (1954), the Army doesn’t win much audience sympathy. The one man with some sense and integrity in both films is scorned by the soldiers and officers. Meanwhile, the Indians get pushed around until their patience runs out. When the shooting starts, the body count on both sides is about equal.

Women in westerns are often the cause of trouble, and Wahleeah the Arapaho maiden does more than her share, mostly by being beautiful and speaking fluent English. Walker expertly extracts a bullet from her spine with a massive hunting knife. She later shows up at his cabin in the wilderness, experiencing some post-operative distress and not a happy captive of the Sioux.

Everybody in the film gets to take off their shirt, and so does she, as massive-shouldered Walker checks the progress of her healing. She chooses one of these moments to come on to him. He perspires, but holds firm. Byrnes falls hard, until Kelly says she can’t be trusted, and anyway, “It won’t work trying to make them live white.”

Kelly goes off to check his trap lines, and he returns to find his cabin on fire and Byrnes with an arrow through his gut. He dies in Kelly’s arms. The Cavalry marches off to do battle with the Sioux but get their asses whipped. The retreating soldiers, their commanding officer dead, are far outnumbered. After yet another attack, when it looks like a repeat of Little Big Horn, the Indian chief is persuaded by Kelly to give up the fight.

In the final scene, Kelly and Wahleeah ride together to meet a steamboat on the Yellowstone. He is alone no more, and we can gather what we will from the smile on his face.

TV stars. The three leads in the film would have been known by audiences not from previous film roles but their current TV series. Clint Walker was Cheyenne in the western series of the same name, which ran for 109 episodes in 1955-1962. John Russell, looking peculiar in his get-up as the Indian chief, was Marshal Dan Troop in 156 episodes of The Lawman.

Edd Byrnes was the hair-combing Kookie in 77 Sunset Strip, which ran for 87 episodes during 1958-1963. His character in 1870s Montana has Kookie’s same haircut, and in some scenes he wears his shirt collar up, as was the teenage fashion in the late 1950s. Hard to say how all this worked for movie audiences back then, finding faces from weekly television on the big screen. But viewers today probably won’t find that as distracting as the old-style Hollywood treatment of the material.

Wrapping up. What works in the film are the dramatic mountain vistas and location photography. The climactic battle has spectacular moments and the stunt work looks bruisingly dangerous. Walker is a stiff presence on screen, but it suits his character, as a man well defended in his tough-minded beliefs and his wish to be alone. Pictures of the real Yellowstone Kelly show a younger man, with a normal build, sporting long hair and a mustache.

Edd Byrnes seems to relax into his role, as a young man in awe of Kelly. You hear his quiet respect every time he says, “yessir.” The cast includes character actor Claude Akins, whose gruff voice and broad face are right for the role of a bluff Army sergeant. Among something like 200 TV credits over a long career, he was Sheriff Elroy P. Lobo in two comedy series, 1978-1981.

The screenplay for the film was by Burt Kennedy, a writer with many Hollywood credits. Among western lovers, he’s chiefly remembered for teaming up with director Budd Boetticher for several Randolph Scott films in the 1950s (Seven Men From Now, The Tall T). This film was based on a novel by Heck Allen (McKenna’s Gold, The Tall Men), another prolific writer for the screen. Of his stories and novels, 63 were made into movies during 1942-1996.

Coming up: More Frederic Remington illustrations
Posted by Ron Scheer at 6:33 AM