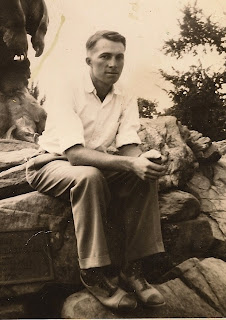 Being a dad isn’t easy, and there should be a medal of honor for dads like mine who got sons like me. Today is my father’s birthday. Born in 1917 to a Lutheran farm family in Nebraska, he grew up speaking German and English. A bright kid, he could have gone to high school, but eight grades were considered enough for a farm boy back then, especially at the start of the Great Depression.

During those grapes-of-wrath years of drought and crop failure, he traveled West with a couple bachelor cousins to find work in California. In 1939 he was back in Nebraska soon to be married, with his future bounded by 80 acres adjoining his father’s farm. The two men farmed together, joined by me when I came along and my legs got long enough to reach the tractor pedals.

The summers I remember were a constant round of haying with him and irrigating corn. Dad had a small dairy herd for several years, which meant a morning and evening commitment 365 days of the year and no vacations.

I was a dreamer and storyteller, a book reader, an over-achiever at school, and ended up getting the education he never had—and then some. Though I was a 4-Her and the only person you’ll probably ever know who was a member of FFA, farming was never in the cards for me. I went off to college, never to return, and if it was ever a disappointment to him, he never said so.

He left farming and worked at what was available to a man with an eighth-grade education in the 1960s. Farming requires a lot of different manual skills. My dad could tear down a tractor and put it back together again. He took a job at a savings and loan company that put him in charge of the physical plant. Perfect for him, he knew how to keep everything running smoothly, and what he didn’t know he could figure out.

After all those years of being at the beck and call of a herd of Holsteins, he loved the chance in those later years to travel. And he visited me wherever I happened to be living with my family—California, Pennsylvania, Connecticut, England. I can’t say we grew closer during those years; he was always a hard man to get close to. But we developed a routine of talking every Sunday on the phone.

Farming is a lonely job, and I think my father was a social man. He enjoyed knowing all the savings and loan employees and being there for them to depend on. And they absolutely could. When he retired at 65, there were some pretty big work shoes for the next man to fill. 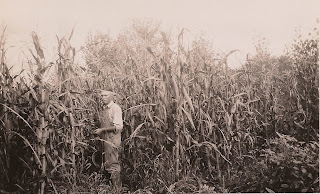 He had only another five years of life after that day he retired. I knew he was sick but didn’t understand until the very last months that he might die. He had always been in the best of health. Our last visit together, I tried to get him to talk about himself, but he would only talk about every other member of our far-flung family. I’ll never know what it was to be him in this world, never know his story the way he would tell it.

He died having just turned 70. Far too young, both for him and for me. For years afterwards, whenever something happened, I would catch myself remembering it to tell him the next time we talked. And today, almost 25 years later, I still have dreams about him. Dreams in which he is a quiet presence, and I want so much to please him.

He would surely be embarrassed by what I’ve written about him here. And it would also be like him to never let on he was secretly proud. He deserved more and better than life gave him, yet he patiently shouldered whatever came his way. And that is no small achievement for any man.