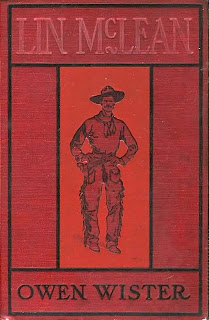 I came across a reference to this novel a few years ago in Dane Coolidge’s Bat Wing Bowles (1913). He notes there that Lin McLean was one of the few books you could find in nearly any cow-country bunkhouse in the West. So I read Lin McLean and loved it, and together these two writers got me hooked on the early-early westerns of that period.

Not quite a novel, Lin McLean is a series of stories centered around its title character, a young cowboy learning the lessons of life. Cowboys had been shooting up the Wild West in dime novels for decades. With Lin McLean, Wister reintroduced him to mainstream popular fiction as a three-dimensional character.

Reinvented. Lin McLean first appeared in 1892 when Harper’s Magazine published Wister’s story “How Lin McLean Went East,” which was later to be the opening chapter of the book. Wister, the product of European schooling and a Harvard education, knew the West from frequent travels there. He had a writer’s gift of observation and the ability to reproduce in words the types of men he found there.

If you’ve ever met cowboys, you recognize them in the manners, speech, and attitudes of Wister’s men on horseback. Call it a mix of hell raising, reserve, deep sentimentality, and arrested adolescence. Among Easterners at the time, “cowboy” meant “outlaw.” Wister cast his hero instead as a hard-working, fun-loving “cowpuncher.”

Plot. The story is set in Wyoming during the open range era of the 1880s. Young Lin McLean has been cowboying for several years. Hearing a sermon on the parable of the Prodigal Son, he is moved to return East for a visit. There he discovers that his sole surviving sibling is embarrassed having a cowpuncher for a brother. Saddened to learn so young that you can’t go home again, he returns to Wyoming, a lost soul.

Meeting a railroad restaurant waitress, he decides in haste to marry. It’s a bad match, but he’s saved by the discovery that she’s already married to another man, Mr. Lusk. She returns to her husband, leaving McLean something of a laughing stock on the range.

Spending a lonely Christmas in Denver, McLean meets a bootblack, Billy, who turns out to be a runaway from the Lusk household. Concerned for the boy, he takes him along back to Wyoming. The arrival of a girl named Jessamine from Kentucky has McLean considering marriage a second time.

This plan is derailed when she learns he’s been married before. Mrs. Lusk makes a dramatic exit with an overdose of laudanum, and McLean, his bride-to-be, and Billy are finally happily together in the last scene.


Character. The book is most of all a study in character. On the brink of responsible manhood, McLean realizes he’s alone in the world. In an early scene, as he rides off onto the prairie to look for roundup work, we watch him go, growing smaller and smaller until he’s no more than a speck on the vast prairie.

Impulsive and not good at considering consequences, McLean is, nonetheless, indomitable. Life’s sorrows may blunt his high spirits, but he remains undefeated. He is not carefree, but he can take pleasures where he finds them. There is the love of Billy, the friendship of his fellow cowboys, and the solace in the farmstead he acquires and begins to improve.

The real West. While Wister can write appreciatively of the West, he doesn’t get carried away. A Wyoming landscape can shimmer with soft colors in the right light. Meanwhile, he can be brutally honest about the isolation and harsh climate.

A special case is Drybone, an abandoned Army post from the days of Wyoming’s Indian Wars. Here the officers’ quarters and commissary have been turned into a saloon, dancehall, and hotel for gamblers and whores. The post cemetery is now a place of disposal for the bodies of men and women who arrive but, due to mischance, never leave.

The nightly revels are to Wister a kind of sacrilege, as he recalls those who once lived here in service to their country during troubled times. There is dark irony in his remembering the Indian Wars and the shifting War Department policies meant to benefit arms dealers with friends in the Department of Interior. He observes grimly that good men and women died in this remote outpost as a result of self-serving decisions made in Washington.

Social history. Besides being a fine storyteller, Wister rewards reading today for his recording of the social life of the 1880s frontier. The simple occurrence of a supper shared by several cowboys and a single woman in a railway hotel restaurant is richly detailed. Observing what Wister calls “the invariable alkali etiquette,” the men sit at several chairs’ distance from the woman, “all faces brooding and feeding amid a disheartening silence as of guilt or bereavement.”

When a young Texas cowboy wipes his mouth on the tablecloth and tries gamely at conversation, he is reprimanded for lack of manners “in the presence of a lady.” When he leaves the table in a huff, the brief exchange of comments among the remaining diners is priceless.

Wrapping up. Wister was one of the best educated and gifted of early western writers. It says something that while at Harvard he was editor of various publications including the Harvard Lampoon.

With Lin McLean, he created the basic cowboy character who would populate western fiction until the present day. The Virginian would then take him the next step. There the cowboy deals with a true villain, and their differences have to be settled with guns. With that gun duel at sundown and the demise of Trampas, we’re on our way.