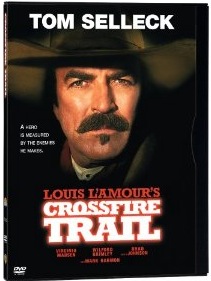 This TNT western brings together the talents of Tom Selleck and director Simon Wincer (Lonesome Dove) with an adaptation of a novel by Louis L’Amour. The plot is pretty true to formula, as Selleck comes to the rescue of a widow about to lose her ranch and herself to an unscrupulous villain. But it’s all done with such care for detail, and the cinematography is so grand, you forget you’ve already seen this story before.

A novel twist is that the story begins aboard a ship off the California coast, where a crew member’s death is avenged on the ship’s captain. Selleck takes care of him in a jaw-wrenching fistfight that gets the movie off to a brisk start. The three-man crew then turns up on horseback in Wyoming (with Alberta as a breathtaking stand-in). There they will fulfill Selleck’s promise to their dying shipmate to look after his wife and now-abandoned ranch.

They are joined by Wilford Brimley, a former hand at the ranch, and the four men take on slick banker Mark Harmon and his henchmen. The villains have a cover-up story for the disappearance of the ranch owner, supposedly killed by Indians on a return trip from San Francisco where he had business interests. We gather that they’ve engineered a plot to have the man shanghaied and put aboard the ship where we first see him and Selleck.

The widow is not easy to rescue. She doesn’t believe Selleck’s story and seems intent on accepting the banker’s proposal of marriage. She only gradually relents. The turning point comes when she stops the banker’s attempt to have Selleck and his men evicted from the ranch.


The banker ups the ante by hiring a hit man from Kansas to dispose of Selleck. Not a gunslinger, he’s more of a sniper, using a high-powered rifle to first kill the youngest of the four men while he’s picking raspberries. Then he climbs into the church tower to await Selleck’s arrival in town.

Meanwhile, the banker has moved quickly to marry the widow, without her consent, begging for a truckload of bad karma by slugging her into submission. Long intimidated by the man, the townsfolk stand by without a word. The only objection comes from the bartender, played by William Sanderson (remembered as E.B. by Deadwood fans), who gets shot for his efforts.

The shootout that follows is long and noisy. The banker’s gang is finally wiped out and Selleck dispatches the sniper from Kansas. The banker himself has the downed Selleck at gunpoint when he’s taken out by none other than the widow herself. And the look on her face says, “You’ve had this coming for a long time.” 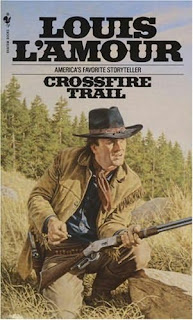 Wrap-up. Somewhat mislabeled as a TNT “Original,” Crossfire Trail shows that in the right hands, the long-familiar elements of the western can breathe with life and excitement. Selleck assumes the manner and attitude of a man grown weary with the ignorance, lies, and greed of others. Raised by Jesuits and exposed at an early age to Milton and Beethoven, his character has a depth betrayed by the intelligence in his eyes.

Brimley, in a fright wig and a substantial mustache, plays his usual seasoned veteran of the range. Glaswegian David O’Hara is a fierce and funny Irishman full of Irish jokes told in a thick accent. Virginia Madsen is fine as the widow who slowly realizes the web of deceit she has been lured into and then takes her own revenge.

Screenwriter Charles Robert Carner provides the four men with wry and entertaining dialogue. The storyline has maybe one scene that becomes a loose end. Selleck and Brimley help an Indian chief’s daughter with a broken leg, and they have to talk their way out of a misunderstanding with the chief. This looks like a set-up that will involve the Indians later, but when they exit, that’s the last we see of them. There’s also the title of the film, which sounds great but doesn’t relate to anything in the story.

The film is crisply cut, especially the extended shootout at the end. Considerable effort has gone into portraying the West with some historic authenticity. And the music swells grandly just when you want it to. I enjoyed this film and look forward to seeing the rest in my boxed set of Selleck westerns.

Crossfire Trail is currently available at netflix and amazon. Tuesday’s Overlooked Films is a much-appreciated enterprise of Todd Mason over at Sweet Freedom.

Coming up: Frederic Remington, Sundown Leflare (1899)
Posted by Ron Scheer at 6:35 AM