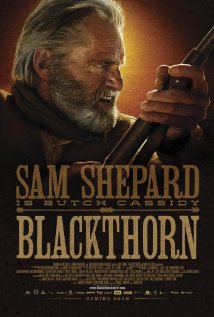 I wanted to like this movie, and for much of it, I did. Then it seemed to run out of ideas and lose its way. When it was over, I wondered how it might have saved itself. I’m no screenwriter, so I have no answers.

At some stage of script development, the film seems to have been about friendship. It’s the 1920s and Butch Cassidy (AKA Blackthorn) has been living peacefully alone in Bolivia on a little spread raising horses. Deciding it’s time to return home, he is joined by a young thief (Eduardo Noriega) who is on the run from a bunch of vigilantes.
An uneasy friendship grows between the two men, and Butch is visited by memories of his years of camaraderie with Sundance and Etta. Butch and his new companion each save the life of the other and eventually come to call each other friend. The movie sets up an expectation that Butch will have one last escapade with a partner in crime and pass on some kind of legacy to his young companion.
The friendship even drifts toward Brokeback Mountain territory, as Butch rubs chewing tobacco into the saddle sores on his partner’s bare backside. But as the two men separate and agree to meet later, the film puts more effort than needed into insisting it’s not gay.
About two-thirds into the story, a former Pinkerton agent (Steven Rea) learns of Butch’s continued existence and in a scene between them, the plot starts going off the rails. Rea’s character delivers a long monologue that might have been OK in a Tennessee Williams play but comes across here as a writer’s confused search for clarity.
The movie then veers away from the kind of ending it once promised, which would be OK if it came up with something better. Alas, it turns into what it hopes is a dark, ironic vision of loss and betrayal. Not that there’s anything wrong with that, but it doesn’t fit with what’s gone before. So it’s both disappointing and bewildering.
The photography and music in the film are quite good. Sam Shepard and Spanish actor Eduardo Noriega are fine, and it’s good to see Stephen Rea again. Filmed in both English and Spanish, the movie was shot on location in Bolivia. Not exactly a waste of show fare, Blackthorn has no trouble persuading us that Butch survived his apparent demise. But what it wants to do with that premise ends up being more than it’s able to deliver.
Coming up: Buster Keaton’s Go West (1925)
Posted by Ron Scheer at 7:00 AM