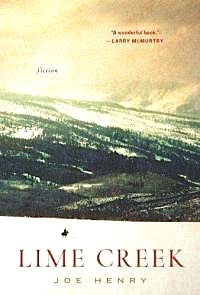 I got to see Joe Henry on a panel at the Humanities Montana Festival of the Book in Missoula. He was a man of few words, who let the others on the panel do most of the talking. James Lee Burke, on another panel, had advised never to use the words “I, me, my” in talking about one’s own writing. Henry, reticent and taciturn, seemed to take that notion one step further.

In his fiction set in the Rocky Mountains of Wyoming, he said, his only intention is to write a story that would be understood anywhere in the world—even by a man in a rice paddy in China. The remark made reading his book a curious experience. I kept thinking of that rice farmer in China.

Character. Lime Creek is an example of that easily likable invention, the collection of related short stories. The time span of the series covers about twenty years. In the first story a college boy from Wyoming courts and marries an Eastern girl. In the last story, one of their sons has a life-changing encounter with a ranch horse.

Taken together, the stories are a celebration of a kind of manhood usually associated with the West. In that respect, they partake of a tradition of Western fiction that goes back to Wister and beyond. Their subject is the matter of character. In particular, Henry writes about what a man owes to others and, maybe more so, to himself.

In two stories, we see the young Luke, first as a little boy and then again as a teenager. In the first, he and his brother learn about accountability from their father. They have taken two armfuls of ripe tomatoes and gleefully pitched them at freshly laundered bed sheets hanging on a clothesline. They don’t get the licking they expect, but their punishment is equally memorable.

In the latter story, Luke refuses shelter for the night during a winter storm, convinced that he can ride horseback several miles back to the family ranch. He makes the freezing journey OK in blowing snow, but before the night is done he has a close encounter with a startled horse and is nearly trampled. The life lesson in this case has to do with learning to live without fear:

Something even deeper than the marrow knows that the cost of avoiding what one fears is even greater than the actual object of that fear and so the fear itself is even more corrosive even more destructive than all the frightening potential of the thing that arouses it.

Henry writes of the heart, and the language of the heart is often poetic. His stories also offer a glimpse into the hearts of men who bear with silence the memory of events that have called for great courage. Those memories may be of a careless accident with a horse, injured, alone and far from home, or the death of a friend during a firefight on a battlefield.

For me it all rings of the West and of the lonely individualism and self-reliance one associates with the West. How stories like that would read in a Chinese rice paddy, I am not one to say. They do reward a reading for anyone who still cares about qualities of character in a man.

Lime Creek is currently available at amazon, AbeBooks, alibris, and for kindle and the nook.

Coming up: More Montana pics
Posted by Ron Scheer at 7:00 AM