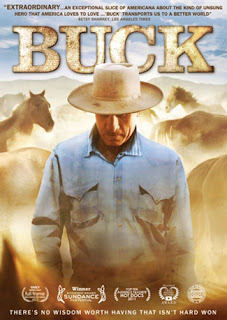 Many will say this is an American story, and that’s partly true, but if it were completely true, you or I would know someone like Buck Brannaman. Chances are good we don’t. He’s the exception to most of the rules. An abused child, he didn’t grow up to be an abusive and bullying adult. A cowboy, he doesn’t subscribe to the rough ideals of cowboy manhood celebrated in most westerns.

Known for his skill as a horse gentler and trainer, he does his work in a way that’s the direct opposite of the traditional “bronc buster.” Instead of overpowering and subduing a horse, he gently but firmly wins its willing trust—assuming the horse has not already been ruined by another human. He doesn’t even wear a cowboy hat. Instead he wears the flat-brimmed vaquero-style hat of the western buckaroo.
The patience and empathy required for his kind of work is not really “American.” Americans are, as a rule, in a big hurry. We want results now, and when it comes to animals, we prefer to dominate them as superior beings. Brannaman’s way with horses will strike many as “touchy-feely” and suspiciously unmanly.
If you can get over that, this film about his life and work will be illuminating. For the many men in our culture who were badly or indifferently fathered, Buck’s story must connect with a deeply buried and denied complex of emotions. As portrayed in the film, he commands respect with a hard-won understanding of how to be strong, independent, and in full possession of oneself, despite one's origins.
This is the ideal of the American cowboy that has long inspired the national imagination. But it is played out here in an unfamiliar way. Buck pursues the humbler path of harmony with the other creatures of God’s creation rather than the more familiar one of domination. And he takes some getting used to.
For anyone not yet hardened to suffering in the world, the film will touch a chord. There’s a long sequence involving a horse so damaged by its owner that Buck is unable to gentle it. Instead of giving a false sense of a man with miraculous powers, the film’s lesson is clear that some damage is irreversible, in humans as well as horses.
You are left to marvel that Brannaman, with luck and something inborn, chanced to overcome his brutal childhood. And it’s interesting that the film says nothing about what became of his older brother, raised by the same abusive father.
For me, the irony of this film is that it represents values that are at the bedrock of Americans today who are otherwise fiercely polarized over nearly every issue. With its portrayal of both quiet self-reliance and willing cooperation, it represents the broad middle ground of national character. It speaks to a consensus that lies between those on the right who would suspect it of bleeding heart liberalism (it even has an interview of Robert Redford!) and those on the left who associate cowboy hats with John Wayne-style conservatism.
Alas, it’s a rare movie that actually brings people together, and this is probably not one of them. All the same, I recommend it as a vision of how we could be as human beings. In a cynical age such as we live in, it’s not easy to find a movie that comes even close to being inspirational. Anyway, the getting of wisdom, as the film shows, is an individual journey, not a collective one.
Buck is currently available at netflix, amazon, and Barnes & Noble.
Photo credit: www.brannaman.com

Coming up: Tom McNeal, Goodnight, Nebraska
Posted by Ron Scheer at 7:00 AM