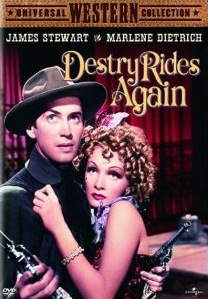 This comic western from 1939 has James Stewart as Thomas Jefferson Destry, who comes from Tombstone to clean up the lawless town of Bottleneck. Though a gunslinger with a dead aim, which he gladly demonstrates, he declares that he’s going to do the job without the use of firearms.

Plot. He arrives 20 minutes into the film, carving napkins rings and delivering aw-shucks lines that make him seem no threat to the saloon-keeping crook who runs the town. Playing Kent, the villain, with his usual smooth relish, is Brian Donlevy. His partner in crime is a chanteuse called Frenchy, played with sultry comic flair by Marlene Dietrich, at her best.

Kent and his henchmen have done away with the previous sheriff, and until Destry finally gets his back up by film’s end, they don’t see him as a problem. They take possession of a ranch, won with a bit of trickery in a card game. Destry even supports their claim, since they have it in writing.

Trouble begins to brew when Destry gets over curious about the disappearance of the previous sheriff. When a body turns up, suspicion settles on Kent. Before long the new sheriff is dead, too, shot in the back.

Accounts are finally settled as Destry gets out his guns and with some dynamite mounts an attack on the saloon. There in a melee between the saloon customers and a force of outraged women of the town, Donlevy attempts to gun down Destry. But his gunfire takes the life of Frenchy instead, who has put herself inconveniently in Destry’s arms. And Kent meets his end, with a shot from the now-armed Destry.

Comedy. I’m no big fan of western comedies, and I could name a few. But this one beats them all for sheer fun. Hard to say exactly what makes it work. On the one hand, it’s a sober-sided story about a town run by a slick bastard who cheats an honest man out of his ranch and kills an officer of the law to cover it up.

Then it can veer off into broad farce, as when a married man loses his pants in a card game with Frenchy. When his wife comes into the saloon to sling a few insults, Frenchy isn’t above slugging it out with her. Their furniture-smashing fight is a wild parody of every barroom brawl ever seen in a western.

As for Dietrich’s character, she’s a fun-loving dancehall queen, who knows she’s gorgeous and can have any man she wants, married or not. Yet there’s an honest woman in her somewhere fighting to get out, and Destry’s friendship stirs up feelings she’s long hidden from herself. A woman with a past, she’s destined by the Hollywood Production Code to die with no more than a kiss from the man she’s come to have some feelings for.

So the film is not all scenes of knee-slapping glee. The town drunk reforms when he’s appointed to fill out the term of the previous sheriff and is shot for his efforts to bring law and order to the town. His death is played for all the honest sentiment to be wrung from it.

The farce balances the sentiment, and at the center is the bemused character of Destry himself, who wants no more than to be an honorable man and do the right thing. And that is surely the key to what makes this film such a pleasure.

Some credit surely goes to veteran director George Marshall, with a mile-long list of film projects going far back into the silent era. Fifteen years later he directed the remake, Destry (1954), with Audie Murphy. Screenplay credits go to three writers: Felix Jackson, Gertrude Purcell, and Henry Myers. The script was based (no doubt very loosely) on a novel of the same name by Max Brand.

Destry Rides Again is currently available at netflix and amazon. Overlooked Movies is a much-appreciated enterprise of Todd Mason over at Sweet Freedom.

Coming up: Overland Journeys in Early Western Fiction
Posted by Ron Scheer at 7:00 AM