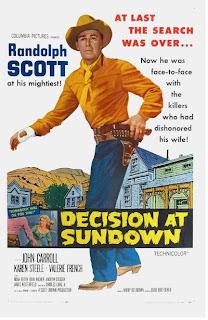 I think of this as a domestic western. It takes place almost entirely in town and indoors, like a TV episode of Gunsmoke. Not that there’s anything wrong with that. Other examples come to mind, like Rio Bravo, which are classics.

Plot. In this one, director Budd Boetticher works with Randolph Scott again to tell a story of a man driven by revenge but who isn’t playing with a full deck. We begin to realize that as the story unfolds, though we should have a clue in the first scene when he gets a stagecoach driver to drop him off between stops by acting like it’s a holdup. Later, he walks into a church during a wedding and doesn’t remove either his hat or his gun belt.

Scott is there to payback a smooth operator named Kimbrough (John Carroll) who he believes drove his wife to suicide. From the start, we get that Kimbrough is a sleazy type, when he’s still keeping company on his wedding day with another woman, Lucy (Valerie French). Add to that the fact that he runs the town, owns the sheriff, and has everyone afraid of him.

Everyone but the town doctor (John Archer), who berates his fellow citizens for doing nothing while the town has been taken over by Kimbrough (shades of Hollywood’s knuckling under to Joe McCarthy and the HUAC). With some irony, only the misguided and misinformed Scott has had the courage to actually confront the man.

Scott’s sidekick in the whole affair is Sam (Noah Beery, Jr.), who has the warmth of character missing in Scott’s steely determination. The two are holed up in a livery stable, while Kimbrough keeps trying to broker a deal with them to get out of town alive. Sam finally draws the line, no longer willing to defend the good name of a dead woman who wasn’t all that good.

Eventually, we get to the fated gun duel in the main street of town, where Scott and Kimbrough have their final face off. A story shot through with irony can’t be expected to have a conventional ending, and this one doesn’t. It’s finally Lucy, the “other woman,” who gets what she’s wanted from the very beginning. The rest have to settle for a bitter lesson learned.

Design and casting. The look of the film makes it seem destined for primetime TV. The costuming is colorful, and as the story takes place on a wedding day, all the characters are dressed in their best. Shot on a western town set, the streets and storefronts look spruced up and orderly. Interiors are the same and lack a feeling of being lived in.

All of which is to be expected. Harder to account for is the lack of younger performers in front of the camera. For a frontier town, nearly everyone is middle-aged and older. Lantern-jawed Andrew Duggan, who plays the sheriff, H. M. Wynant, a deputy, and Richard Deacon, the Justice of the Peace, were in their 30s. The rest of the cast is an enjoyable lot of older character actors, including James Westerfield as the bartender.

Scott, of course, is terrific. Lean and angular, he has the physical presence you’d expect of a dancer. Boetticher seems never to have failed to get an iconic performance from him. Screenplay credits go to Charles Lang, who wrote the script for another Boetticher-Scott film, Buchanan Rides Again (1958).

Decision at Sundown is currently available at netflix and amazon. Overlooked Movies is a much-appreciated enterprise of Todd Mason over at Sweet Freedom.