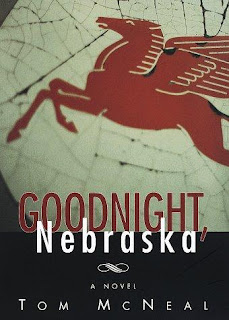 In observance of turning 70 today, I'm reviewing a book from my home state, Nebraska, set in my favorite part of it, the treeless, rolling terrain of the Panhandle. The Goodnight of the title is a small town, surrounded by the uncompromising harsh beauty of the landscape, where the characters' lives depend much on the ability to withstand solitude and isolation.

Randall, the young protagonist, contracts into a self-protective stoniness as he fetches up here on his own like a shipwreck victim. Marcy, the girl who becomes his sweetheart, strives for a hard-won personal independence from her hard-working farmer parents. The teenage couple's late-night lovemaking and eventual marriage are an against-all-odds attempt to keep from being swallowed up by the indifference of the natural world and the conventional expectations of their small-town world.

Given the explosiveness of young Randall's character, his insensitiviy, and his distrust of others, it's a welcome surprise when he grows to steady and responsible manhood. So is his loyalty to Marcy and his willingness to regard her as an equal in love and marriage. He even agrees to her leaving him for an adventure of her own in California. Her discovery of him asleep in his pickup, parked in the driveway at her apartment house, the smell of rural Nebraska still filling the cab, is a wonderful portrayal of the bond that holds them together.

Another long sequence in the novel describes a hunting party that grows progressively unnerving, as the more trigger-happy in the group get steadily drunker and more frustrated at the lack of game. There is an ominous threat of trouble as you follow them, page after page, and eventually learn of the dark deeds of the day.

Tom McNeal's Goodnight, Nebraska is currently available at amazon, AbeBooks, alibris, and Powell's Books, and for kindle and the nook. Friday's Forgotten Books is the bright idea of Patti Abbott over at pattinase.