Have you ever started out on a project that just kept growing? A year and a half ago I got the idea I’d like to read the novels of the writers who helped invent the western. There was Owen Wister and Zane Grey, and a gap of about a decade between them. I figured there was maybe a dozen writers at the time trying their hand at cowboy westerns. It would not be a big job.

Acquiring a few reference books, like Tuska and Piekarski’s Encyclopedia of Frontier and Western Fiction and Geoff Sadler’s Twentieth-Century Western Writers, I found there were a good deal more than a dozen. The notion of a “cowboy western” also enlarged until I was considering any fiction set in the West. Western writers of the time were also telling exciting stories about mining, railroading, and engineering projects. Cowboys sometimes figured in them; sometimes not. So the notion of a “cowboy western” got fuzzy and then kind of leaked away.

The period I was looking in expanded, too. There were more western writers than I expected to find who were publishing before Wister. If you think about it, there were “westerns” to be read from almost the beginning of American fiction. From the days of the first white settlements, there was always a “West” out there beyond civilization. I arbitrarily chose to draw the line at 1880.
At the other end of the period, I came to see WWI as an important watershed and chose to stop with 1915. That was also the first year after The Virginian that a western novel reached the annual top-ten best seller list at Publisher’s Weekly. It was Zane Grey’s The Lone Star Ranger. (His The U.P. Trail would go to no. 1 in 1918.)
What made the project doable at all was the purchase of a nook and the availability at Barnes & Noble of nearly every book I was looking for at .99 or free. So far, I have read the first novels or story collections of 48 writers, starting with Mary Hallock Foote’s The Led-Horse Claim (1883) and ending with George W. Ogden’s The Long Fight (1915). Meanwhile, my TBR pile of early westerns has kept growing. 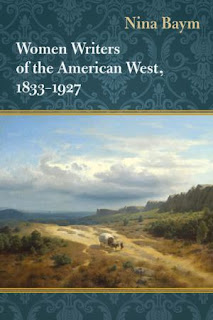 The light was at the end of the tunnel a week ago until I got my hands on a copy of Nina Baym’s Women Writers of the American West, 1833-1927. It’s an old story, and we know how male writers took over the genre of western writing. Women, it turns out, were also publishing volumes of fiction about the West. I’d found a few of them before now: B. M. Bower, Mary Austin, Kate Boyles, and Carol Lockhart. Now I’ve got a bunch more. Which is a lot of reading, but definitely cool. I like the idea of a more balanced picture.
So I am now miles away from the book I’ve been putting together about these writers. There’ll be about 75 of them when I’m finished. Maybe a year from now, you’ll hear me shout on the western wind, “I’m done!” In the meantime, I’m enjoying this project even more now than before, and I continue to believe I’ll be pleased with the end result and that readers and writers of westerns will find it fun and informative reading.
I’d be interested in hearing stories by anybody else who's had similar experiences.
Photo credits: Wikimedia Commons
Coming up: Tom Mix, Sky High (1922)
Posted by Ron Scheer at 6:00 AM