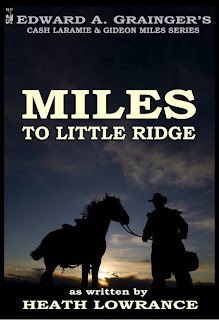 Cash Laramie and Gideon Miles belong to us all by now, which is how fast things happen in the new Old West. Already a franchise, and none to soon for Edward Grainger fans, this pair of U.S. Marshals portrays a timely style of frontier justice. And hats off to Heath Lowrance for contributing to their unfolding stories with such heartfelt energy.

Hard-boiled crime fiction has been well suited for a certain vision of moral ambiguity and an unreliable criminal justice system. The western, with its Code of the West, has been visiting that same lawless territory since before Owen Wister. The two genres, as they do here, can blend seamlessly.
Gideon Miles, as most of us know by now, is a black man with arguably a white man’s job. In the world of the whites-only western, colored folks if they appear at all were once referred to routinely with the n-word. While a polarized nation went to bloody war over their slavery, they all but disappeared from the mythology of the West.
Emancipated though they may have been in America, they were still regarded as an inferior race, along with Indians, Asians, and so-called “half-breeds.” A long-active racial hysteria intensified in the country after the Civil War, taking legal form in laws against so-called “miscegenation” and enforcing segregation.
There were regiments of black “buffalo soldiers” all of them with white officers. And there were homesteading settlements of freed slaves to be found on the plains of Kansas and Nebraska. Historical research has found that blacks had a visible presence in nearly all walks of life, including cowboying, all over the West. Reading most western fiction, back to the turn of the last century, you would not know it.
So here we have something of a compensation for that oversight in a historical anomaly that only fiction can provide—a black U.S. Marshal. True enough, his character is based on an actual historical anomaly, Bass Reeves, who provided federal law enforcement in Indian Territory, until it became the state of Oklahoma and he was put out of a job. But there was no Gideon Miles on the payroll for the feds in the Wyoming and Montana of 1885.
So Edward Grainger has had to invent one. Thus there are the particular pleasures to be had in a Gideon Miles story. Miles embodies the fierce independence celebrated in the western hero who stands up not only to criminals (“murderous skunks” as a Louis L’Amour character calls them). He must remain untouched by undisguised racial prejudice, and the color of his skin means he can trust no one—not even another law officer. Add to that another complication: as an armed lawman, he can fire only when fired upon.
Miles is a perfect hero for certain readers who have always been drawn to the western. There they can find the sense of isolation and vulnerability that comes with realizing the shortcomings of a flawed or inadequate criminal justice system. Gun law, as practiced in the Old West, has both a practical and romantic appeal for these readers.
At a time of political polarization evident in every sorry report of partisan wrangling from Washington, it’s not surprising that a Gideon Miles or Cash Laramie should emerge in the imagination of readers impatient with the nation’s unmet need for social justice. While Miles, despite all the odds, represents respect for the letter of the law, Cash is a kind of “rogue cop,” serving and protecting the marginalized with his own brand of justice.
Miles to Little Ridge articulates all this very nicely. Suspend your disbelief about black U.S. marshals on the frontier, and Heath Lowrance takes you on a journey that honors what you surely care about—eliminating hardened criminals and upholding the law, without making a single compromise.
Not only that, for any reader who ever feels alone, misunderstood, and unappreciated, Miles represents the saving importance of personal integrity. That may be a cold comfort, but it is a value that has been celebrated by the western since the beginning. To the extent that we can learn such a thing from fiction, it’s here to be learned and learned again.
Miles to Little Ridge is currently available for kindle.
Photo credit:
Coming up: Honoré Willsie Morrow, The Heart of the Desert (1913)
Posted by Ron Scheer at 5:00 AM