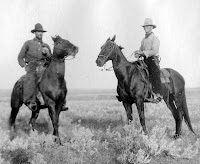 This early cowboy western by Scots-Canadian writer Frederick Niven (1878-1944) is a character study of a frontier outlaw with “good” bad man credentials. Like other train robbers and road agents of western history, he is absorbed into the cowboy culture of the open range between his crimes. There, even should his identity be known, he’s given shelter from the long arm of the law.

Niven, who spent time in the West as a young man, seems to understand this careful balance between observing the letter of the law and loyalty to the Code that preceded it. One often serves justice better than the other. One is a more accurate measure of a man’s character than the other.
The Apache Kid in this case is a decent and honorable man, who happens to rob trains. Even in that vocation, he exercises scruples, cleverly outwitting an expressman instead of shooting him.
Deeply thoughtful, he’s something of a philosopher. Smarter than your average lawbreaker, he knows how to deal with more venal men to get what he wants from them. Nervy and daring, he can volunteer under an assumed name to help a sheriff’s posse track down a gang of cattle rustlers.
Villainy. The villains and crooks in the story are those men who lack character. And they can be found in both high and low places, including the seats of power occupied by elected officials. No less a man than a U.S. Senator is willing to cut a deal with a convict for his own personal profit.


Meanwhile, a ranch foreman shows his true colors when he fires a new cowhand for using another name beside his own and then reports him to detectives investigating a killing. This behavior violates the Code, whereby a man may go by any name he chooses, and whatever is known about him is never freely revealed to authorities.
Humorously told in many ways, the novel is fully serious about how to judge the worth of a man. Being on the wrong side of the laws that protect the corrupt and the greedy is not enough to brand a man a criminal. Even a sheriff comes to that conclusion when he chooses not to arrest the Apache Kid and then turns in his badge.
Plot. The story is told in first-person by a young Scotsman, Will Barclay, who has run away from home, thinking he’s killed a hooligan in the streets of Glasgow. Fetching up in the arid West, he steps off a train in a whistle-stop called Black Kettle. Taking a job with a railway crew of burly and hostile Italians, he is rescued from assault by a man on horseback who turns out to be the Apache Kid.
Befriended by a cowpuncher, Panamint Pete, Will takes a job at the Diamond K ranch, where he learns the rudiments of horseback riding and working cattle. News of a train robbery by the Apache Kid soon animates the cowhands.
When Apache and his partner Jake Johnson are captured and sent to prison, he offers to reveal the whereabouts of stolen government bonds in exchange for pardons. But only he gets his freedom, and two troopers have ideas of their own about what’s to become of him and the bonds once they’ve been retrieved.
The narrator happens upon them and prevents Apache from becoming the victim of foul play. Thus he repays the man for his earlier rescue from the Italian railway crew. There follows an exchange of gunfire with the troopers, and both fall dead, one shot by Apache, the other by Will.
Buck Johnson, the brother of Apache’s partner, makes an unwelcome entrance into the plot. Already wanted as a cunning cattle thief, he tries to get his hands on the stolen money. Angered by the man, Apache joins the posse when the county sheriff is charged with bringing him in. Tracked along the Outlaw Trail to the Hole in the Wall, Buck and his gang are dispatched in a dawn firefight.
There follows some days off for recreation at a big rodeo, during which Will gets involved in the involuntary manslaughter of a policeman who is on the trail of Apache. Then it’s back to the routine of ranch work, which is abruptly interrupted by the arrival of Apache, with a posse in hot pursuit. As the cowpunchers attempt to save him, he is shot down and dies.
Structure. If the plot seems somewhat rambling and unfocused, it may well be that Niven is more interested in other matters. Affecting a more documentary-style verisimilitude, he even remarks wryly at one point that if this were a novel, events would move along more quickly.
Chiefly, the novel keeps coming back to this irony of qualities of character to be found in a high profile lawbreaker. Also noteworthy is the presence of a social network of law-observing men who harbor and protect him, while discouraging him from getting deeper into trouble.
And all of it is embedded in the point of view of a tenderfoot from Scotland, whose story is that of a stranger in a strange land. Frequently the novel digresses into cultural observations of English-speaking men, their roots in the Old Country, who nevertheless live by their own rules. Fascinated, Niven and his narrator choose not to pass judgment.
Unlike more plot-driven western novels of the period, Hands Up! offers a running commentary on the customs and habits of frontier cowboy culture. We learn that
Like many western novels of the time, this one is also about the transition to manhood. A kind of bildungsroman, it begins with a boy’s irrational flight from the consequences of an impulsive act and ends with his achieving confident maturity. Reunited with his father on the last pages, he is greeted with his father’s first words, “Will! I see you are a man!” (p. 286).
A journalist, writer, and traveler in both North and South America, Niven produced a long series of novels during his life, largely set in Scotland and western Canada where he settled in mid-life. Hands Up! is currently available for kindle and the nook. Friday's Forgotten Books is the bright idea of Patti Abbott over at pattinase.
Photo credits: Wikimedia Commons